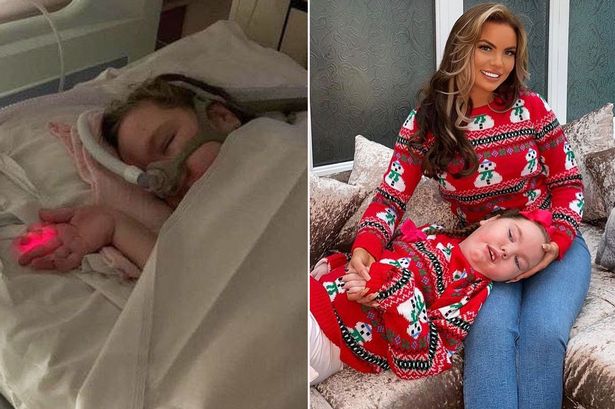 Kelsey Stratford’s little sister has been rushed to intensive care after testing positive for coronavirus.

The TOWIE star, 20, said Kennedy, eight, had been rushed to hospital after falling ill and was then quickly moved to the ICU.

Kennedy was already diagnosed with spinal muscular atrophy (SMA), a genetic condition that makes the muscles weaker and causes problems with movement.

The little girl already suffered breathing problems, which have now been made worse by Covid-19.

She said her family are “heartbroken” by the news but told fans that her sister is “really fighting”.

Taking to her Instagram, Kelsey said: “Life is so cruel.

“My little sister Kennedy got rushed into hospital yesterday and tested positive for COVID19.

“We are all so heartbroken as Kennedy has severe breathing problems from her terminal illness SMA as it is.

“So this is very dangerous for her.

“Kennedy was high risk to covid & we tried our best to shield her from this terrible virus but unfortunately because of her low immune system she caught it.

“She is in intensive care but really fighting like she always does, so I just need everyone to keep her in your prayers and hopefully she gets through this.

“My strong little girl she doesn’t deserve any of this.”

Kelsey also shared a video of Kennedy watching YouTube videos as she looked back at happier times.

It comes after another tragedy hit the family as Kelsey’s brother and Kennedy’s twin Karter died.

Karter was also born with spinal muscular atrophy but died just weeks after he was diagnosed.

Earlier this month Kennedy had surgery that she has to have twice a year because of her SMA.

Kennedy has a spinraza treatment, which is injected into the spinal fluid surrounding the spinal cord in the lower back.

In a recent episode of TOWIE Kelsey revealed that before the treatment Kennedy was unable to speak.

It aids her muscle movement so that she finds it easier to move.

Kelsey said: “She’s [Kennedy] in hospital at the moment for two weeks.

“Every six months she has to have an operation called spinrazer, she has it in her spine and it helps her muscles so she can move.

“Before she had this treatment she couldn’t talk or do anything like the things she does now.

“To me this is the most important thing in my life and I don’t want there to be any agg at all.”