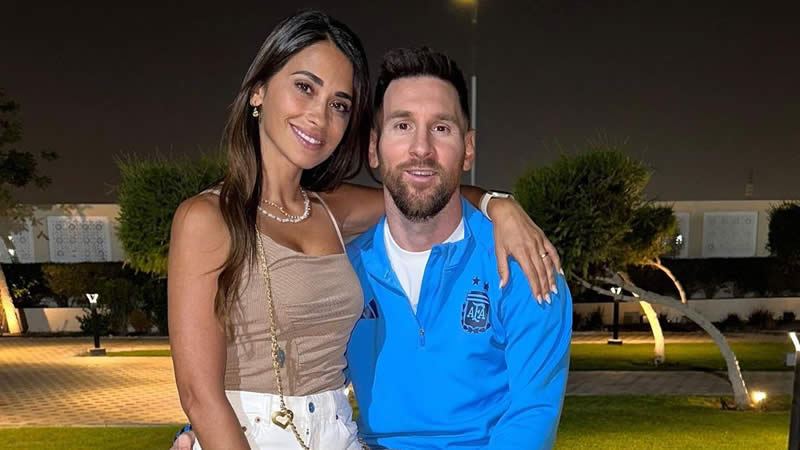 Lionel Messi’s love for Antonela Roccuzzo is as well-known as his soccer career.

Roccuzzo, who is frequently seen cheering on the Paris Saint-Germain F.C. star at games, and Messi met as teenagers and fell in love even after he moved away from Argentina to train until life brought them together again years later.

Everything you need to know about the Argentine model and influencer is right here.

The couple met as children in their birthplace of Rosario, Argentina, through the model’s cousin, Lucas Scaglia. Messi went to Barcelona to train in soccer when he was 13 years old, and he made his competitive debut in 2004 at the age of 17.

Years later, after Antonela’s best friend died in a vehicle accident, the couple reconnected. According to Yahoo! Sports, Messi returned to Rosario to soothe her.

They started dating in 2008 but kept their relationship a secret until 2009 when the soccer player announced it in an interview.

Roccuzzo graduated from the National University of Rosario with a bachelor’s degree in arts and social sciences and began postgraduate studies in dentistry.

According to Vanity Fair Espaa, she postponed her studies to be closer to Messi in Spain.

Rocuzzo has more than 20 million Instagram followers, where she often posts snippets of life with Messi and their family, as well as fashion and fitness businesses.

She signed a contract with designer Ricky Sarkany in 2016 and has previously worked for Adidas and Stella McCartney. In 2017, she and Sofia Balbi created a store for the Argentinean brand Sarkany.

After having their first two children in June 2012 and September 2015, the couple married on June 30, 2017, in Rosario, Argentina. The event was called the “wedding of the century,” and guests included Gerard Piqué, Shakira, and Neymar.

On Instagram, the 34-year-old businesswoman quoted lyrics from “Sin principio ni final” by Abel Pintos, sharing, “My husband ❤️ Thanks to our whole family and friends for joining us!!! We love you so much💍👰🏽🤵!!! #felicidad #siquiero❤️.”

Messi has consistently shown his admiration for the mother of his children.

“My wife, Antonela, has lots of great qualities,” he told FC Barcelona. “I really admire how she deals with the day-to-day, she is always in a good mood and she approaches problems admirably. She is highly intelligent and well rounded in all aspects of life.”

Rocuzzo cheered from the stands as Messi and the Argentina national team defeated France to win the 2022 FIFA World Cup. She raced to the field with her children after the victory to congratulate the GOAT and rejoice with him.
“WORLD CHAMPIONS 🇦🇷🇦🇷🇦🇷🇦🇷🇦🇷🇦🇷🇦🇷🇦🇷🇦🇷,” she wrote on Instagram. “I don’t know where to start…we feel such pride for you @leomessi. Thank you for teaching us to never lower our arms, to fight until the end.”

She added, “FINALLY IT CAME TRUE YOU ARE WORLD CHAMPION, we know what you suffered for so many years, what you wished until you achieved this!!! LET’S GO ARGENTINA 🇦🇷🇦🇷🇦🇷.”