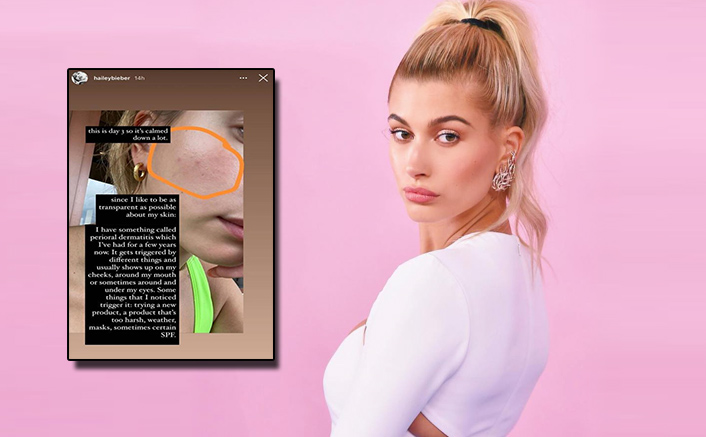 We often look at the glass skin of celebrities and think what extra efforts they put to get that flawless skin. Hailey Bieber is talking about her skin struggles for her fans and says that the model wants to keep it transparent. Victoria’s Secret model has a skin problem called perioral dermatitis and revealed how it causes skin rashes.

Hailey Bieber took to her Instagram account and revealed about her skin rash problem with a pic that read, “This is day 3 so it’s calmed down a lot since I like to be as transparent as possible about my skin,” the model wrote.

Hailey Bieber continued, “I have something called perioral dermatitis which I’ve had for a few years now. It gets triggered by different things and usually shows up on my cheeks, around my mouth, or sometimes around and under my eyes. Some things that I noticed trigger it: trying a new product, a product that’s too harsh, weather, masks, sometimes certain SPF.”

This isn’t the first time that Hailey Bieber is talking about her skin struggles. We often see her sharing skincare tips and products with her fans on Instagram.

Back in May, during the husband Justin Bieber’s Facebook Watch series, The Biebers on Watch, Hailey spoke about the skin problems after taking birth control pills and said, “Actually, within the last year, I started getting a little bit of, like, onset adult acne too from my IUD because I’d never been on birth control before, so my hormones were a little out of balance. But for me, my spot was my forehead…it would be, like, a little pattern.”

Before taking birth control pills, Hailey Bieber doesn’t really have any major skin problems and said, “I hid it really well. Like you said, because when you’re used to having good skin, the smallest little thing feels bad, like, the end of the world. And I’d never experienced acne like that, or pimples like that, before.”

Tiger Woods does not need to roar any more

Paris Hilton: I am single