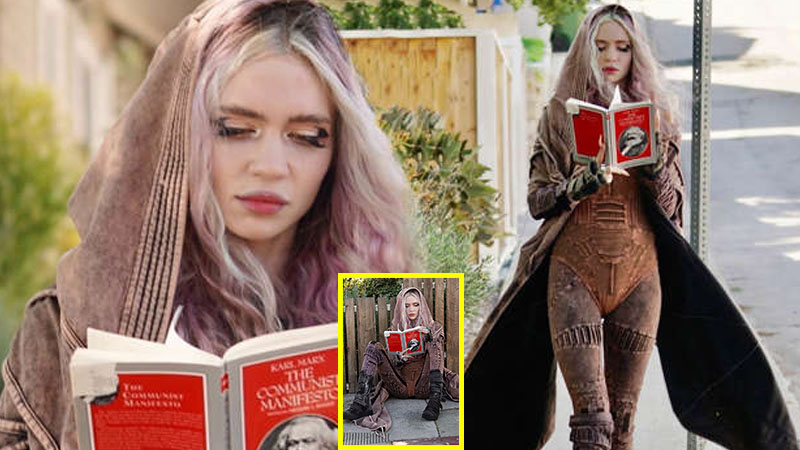 Grimes was spotted walking around the streets of Los Angeles while reading Karl Marx’s Communist Manifesto on Friday.

The 33-year-old musician was seen perusing the pages of the highly influential text as she sported an eye-catching clothing ensemble, although she later admitted that her excursion was a ploy to elicit odd headlines from media outlets.

The Oblivion singer’s outing marks the first time that she had been seen in public since she split up from her former boyfriend and father of her child, tech billionaire Elon Musk.

The performer, born Claire Elise Boucher, was also seen wearing a dark brown one-piece that stayed at her midsection, as well as a hooded cloak that draped over her shoulders and backside.

Given that Elon Musk is currently the richest man in the world, Grimes is clearly trying to take a jab at Musk using the communist manifesto. Which is all about the proletariat or “working class,” overthrowing the bourgeoisie or the “upper class,” which is a word synonymous with Elon Musk.

Grimes later took to Twitter to let her fans know that she was attempting to play a joke on the press by reading the text.

She expressed that the ‘paparazzi followed me 2 a shoot so I tried 2 think what I could do that would yield the most onion-ish possible headline and it worked haha.’

The musician later clarified that she was aware of the outlandishness of the photos and that she was not interested in over-analyzing her behavior and actions.

She noted that she had ‘taught me to stop checking if other ppl think I’m socially acceptable a long time ago. Worrying about being cringe is the enemy of art, failure tolerance is essential for creativity. Deciding not to be mad at ppl enjoying life is ok.’

Grimes later took to her Instagram account to speak about the press’ reaction to the photos, and also pointed out that she was ‘still living with ex in a post’s caption.

The performer also expressed that she was ‘not a communist and that she did not know how to articulate her personal beliefs regarding governments at the moment.

‘My opinions on politics are difficult to describe because the political systems that inspire me the most have not yet been implemented,’ she said.

The singer then noted that, if she remained the subject of the press’ attention, she would consider playing around with photographers even further.

‘If paparazzi keep chasing me perhaps I will try to think of more ways to the meme,’ she said.

Grimes and Musk were initially romantically linked in 2018, and the musician previously expressed that they had met over Twitter after they both made puns regarding the thought experiment Roko’s Basilisk.

Prior to becoming involved with the musician, the 50-year-old businessman, who is worth nearly $200 billion per Forbes, was married to author Justine Musk from 2000 until 2008, and the pair welcomed a total of six children during their marriage.

The native of South Africa then began a long-term relationship with actress Talulah Riley, and they have married first from 2010 until 2012 and again from 2013 until their final split in 2016. -dailymail