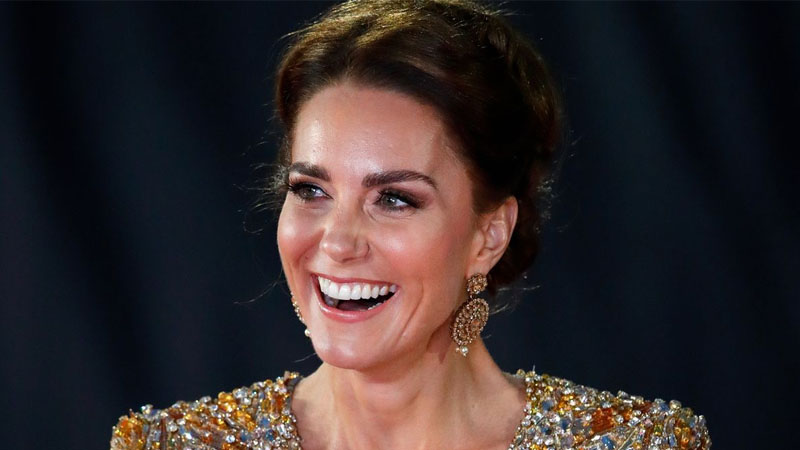 Kate Middleton looked every inch the Bond girl on the No Time To Die red carpet. The Duchess of Cambridge brought all the glamour to the delayed premiere of the last in the film series featuring Daniel Craig as James Bond.

A golden girl from head to toe, Kate wore a custom-made Jenny Packham gown complete with a floor-length cape that glittered under the lights.

Royal watchers will have spotted some key changes in her beauty look as Kate’s look was ramped up a gear.

And there were four key things that we’ve noticed that Kate doesn’t often do as part of her beauty routine. It’s fair to say, the look came together beautifully, we’d like to see more of this.

We may as well start from the top, Kate’s updo for the film premiere was as intricate as we’ve ever seen on her. Her chestnut lengths were woven around the back of her head, volume and shape were kept at the front of the head making it less severe.

So, were extensions added to create more volume at the back? We’re not entirely sure, Kate Middleton has a lot of hair. If they were, we reckon they were only small sections probably clipped in for the night.

The next thing we noticed was Kate’s incredibly even tan. Yes, it’s only a blink since summer but her golden skin brought the Packham dress to life. But we suspect Kate had a spray tan for the red carpet, and bronzed skin really suits her it has to be said. The next beauty upgrade is one we’ve never seen on the Duchess of Cambridge.

Looking closely at Kate Middleton’s makeup it’s safe to say the Duchess is wearing lashes. False lash strips we imagine, a lash lift or semi-permanent lashes wouldn’t be very Royal, a fluttery strip for a special occasion is ok.

And what a difference it makes to her red carpet look! This she teamed with bronze and brown eyeshadow, making her eyes look really big. Dare we say it, but it looks as though Kate’s got soapy brows too? This change of makeup is quite radical for everyone’s favorite Royal.

As Kate is such a fan of neutral eyeshadow and Lancome mascara, it’s nice to see her pull out all the stops for the Bond film. The look is very professional, Kate didn’t do this makeup at home, we wonder who was brought in to do it? The last key difference to her usual makeup proves that she had a professional MUA on the job.

For the first time ever, Kate Middleton had a proper contour going on. A fan of a pop of Bobbi Brown blush usually, the Duchess had sculpted cheekbones and a touch of sunkissed skin and a little blush.

So, this is really the way to wear it, all three elements – contour, sunkissed highlight, and blush look incredible together. But, it’s not easy to do yourself, whoever gave Kate this makeover is a very good artist.

Out of 10 for a red carpet look, Kate gets a full score. This is the most glamorous we’ve seen the senior Royal, more of this, please.