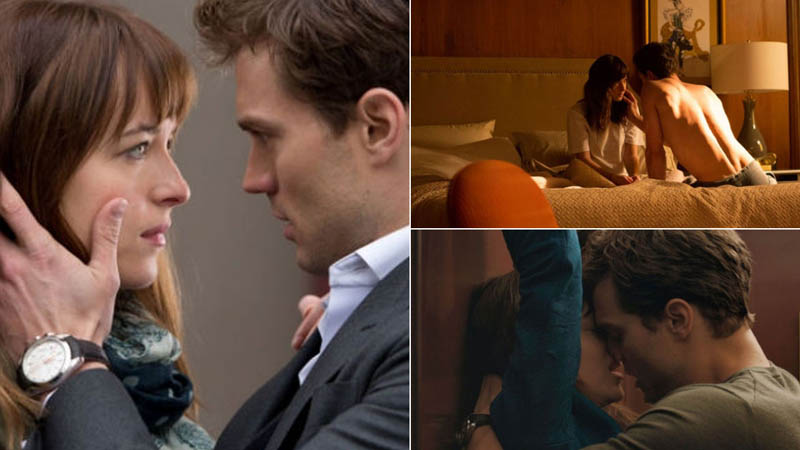 But the book sucked. I know there are three novels (Fifty Shades of Grey, Fifty Shades Darker, and Fifty Shades Freed), but I only made it through the first one. Literary torture isn’t my thing. But at least James suggested there might be something to learn from what connects a dominant and a submissive. (Only amateurs say “sadist” and “masochist.”) Onscreen, directed by a slumming Sam Taylor-Johnson (Nowhere Man) from a sanitized script by Kelly Marcel, we have the story of a poor, virginal English major — one Anastasia Steele (Dakota Johnson). She finds the perfect man: Christian Grey (Jamie Dornan), a 27-year-old, techno-billionaire hottie out to stop world hunger. Christian has a single flaw — he gets off by blindfolding Ana, tying her up in his Red Room of Pain, cuffing her to the wall and flogging her. What’s a girl to do? According to the romance-novel sympathies of this movie, the answer is: domesticate him into a normal guy who’ll cuddle in the sack, charm her parents and do her bidding.

Where’s the rough stuff? Since the filmmakers are basically remaking Twilight with spikes standing in for vampire teeth, there isn’t any. No need to lock up grandma. Director Taylor-Johnson shoots all this crotch nuzzling and nipple nibbling with the careful good taste of a headmistress with strict instructions not to let the naughty kids get out of hand. The soothing soundtrack, purred and panted by the likes of Beyoncé.

Ellie Goulding and Sia, help the few sex scenes (most saved for last) play like vintage MTV videos — all gloss, no grit. The movie shies away from welts, bruises and bodily fluids, though we do get a quick peek at Christian’s junk while he spanks Ana’s naked ass to a blushing pink. If you’re still with me, and I don’t blame you if you’re not, this kind of Cinderella porn is what substitutes for the book’s darker, bloodier fantasies. Sorry pervs, the tampon scene is gone! Amazingly, Johnson (The Social Network, 21 Jump Street), the daughter of Melanie Griffith and Don Johnson and no relation to the director, plays all this silliness as if she means it. She’s the one bright spot in a film that deals with sex by removing the joy of it.

Luckily, Johnson suggests her mother’s pert, Working Girl mischief and gives Ana a core of feisty intelligence the book never hinted at. Sadly, costar Dornan, an Irish model-turned actor (he’s quite good being bad on the BBC series The Fall), gives her a brick wall to act with. Either pulverized with fear or embarrassment, Dornan seems to have no idea who or what he is playing. Can’t blame him: Christian has no shades.

He’s a human Ken doll with a kinky set of accessories that go unused. Don’t want to frighten the little girls of all ages and sexes who will line up to see this sanitized swill. A few early reviews have given the film a pass because it’s not as dirty as advertised. They seem grateful. I’m disappointed. Twisted me! The true audiences for Fifty Shades of Grey are gluttons for punishment — by boredom. -rollingstone

Butter Up with the Best Body Butters