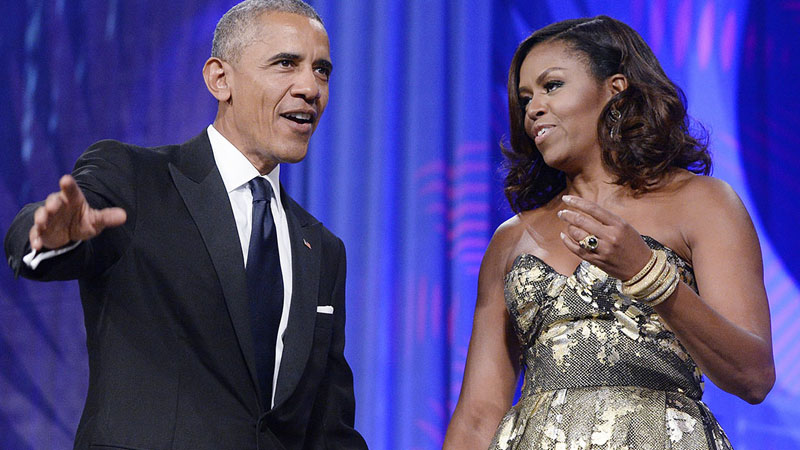 Multiple sources claim that Barack Obama and Michelle’s marriage is in danger because Obama is not avoiding publicity.

Globe claimed that Barack Obama’s book sales created tension between the successful couple. The sources claimed, ‘old wounds and [was] once again [pushing] the cranky couple toward a final marriage crisis’. The article referenced Barack’s comment to Jimmy Kimmel when he said, “I’m not rubbing it in over dinner,” referring to him outselling his wife.

It is funny to be claimed that the couple were arguing on book sales matter, and less plausible that Michelle is filling a divorce because of this. Obama’s remarks to the late-night host were frisky, and it is useless to investigate more.

The National Enquirer issued a report explaining that Obama’s remarks were not getting controlled.Michelle “slapped hubby Barack with an ultimatum: clean up your act — or face a $175 million divorce”, the sources said.

The source even claimed that “despite their loving appearances before the cameras, they’ve had knock-down, drag-out fights.” It didn’t explain the real reason of tension between them. Everything was absolutely normal between them, but the couple’s public appearance is not convincing the papers.

A unique story was also published by the same source claimed, “Starstruck Michelle Obama is splurging on a million-dollar head-to-toe makeover… in a bid to conquer Tinseltown and spice up her marriage.”

This blunt claim was made after Obama’s Netflix Contract, Michelle wanted to “have Barack drooling at how hot she is.” It doesn’t sound true that couple is getting a divorced and one more makeover story hit the head. The Netflix contract of documentaries and movies doesn’t support the idea that Michelle needs any makeover.

Globe explained that during the pandemic, Michelle was suffering from a depression that leads to dysfunctional relationship. The source reported, “Michelle has had it with [Barack’s] self-serving attitude,” and she is ready for a change.

Meanwhile, she reportedly tried to stay away from the publicity. For this, she will leave her husband so they both approach the divorce lawyers. This report is false. As we know magazines and papers sell themselves shamelessly creating false news against the couple.

Trump Appeared Annoyed When Fox Host Asked Why He Was Weighing In On Issues As An “Ex-President”: “You Called Me, I Didn’t Call You”