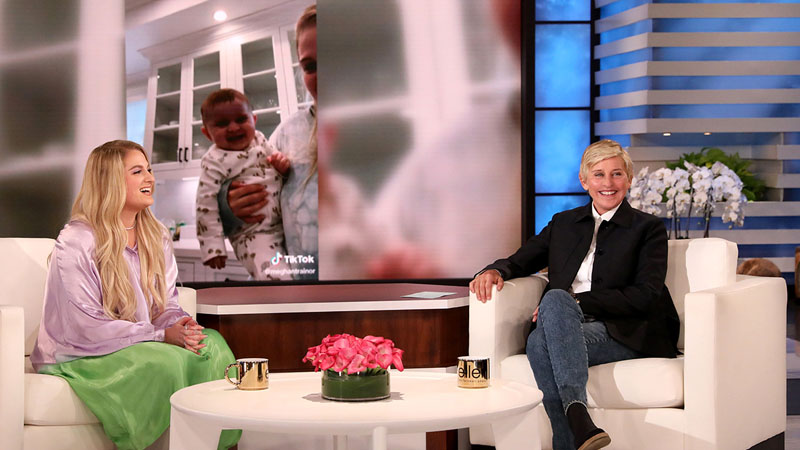 Looks like Meghan Trainor wants a big family ASAP. The singer, who had daughter Riley with husband Daryl Sabara in February, tells Ellen DeGeneres on The Ellen DeGeneres Show that she’s ready for round two and she’d like twins this time. “Why would you want twins next?” asks DeGeneres to which Trainor responds with a smile, “Two in one sound like a deal to me!

“I don’t know, I want three-in-one. I just want so many, but, like, I don’t wanna be pregnant five times. … I just wanna get, in and out, yep,” she further said as per PEOPLE. “Two at one time; I could do it. I love being a mom,” says Trainor. DeGeneres asks, “So you’re gonna try to have kids right away, or are you gonna wait a while?” According to PEOPLE, Trainor says, “Well, we’re a little late this month, so who knows! We’re gonna try.”

However, Riley was born breech, so Trainor had to have a cesarean section, but she recently told PEOPLE that despite the traumatic delivery, she wants to grow her family. She also said that she battled gestational diabetes throughout her pregnancy and that she was terrified of labor in the months leading up to her delivery. “I’m happiest nowadays when I’m putting my baby to sleep with my husband because we do it together every night. We look at each other like, ‘We made the best baby.’ We got so blessed,” Trainor added as per PEOPLE.

Interestingly, the singer further said via PEOPLE, “The biggest change is that anytime I walk into a room with him in it, it’s the biggest smile and the most joy, the most love anyone could ever give you. He recognizes me and he’s like, ‘I’m so excited to see you.’ And to look at that and be like, ‘I made that. That’s crazy. That came from love. That came from soulmates.’ It’s the greatest.”