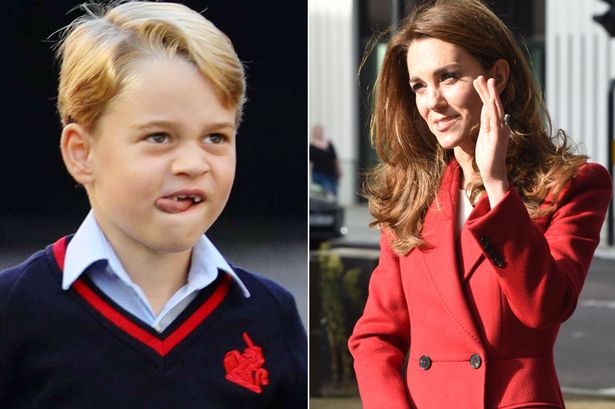 He will grow up as a member of the royal family, before becoming the Prince of Wales and then taking the throne as King.

But despite his unique future, his loving parents the Duke and Duchess of Cambridge want him and his younger siblings, Princess Charlotte and Prince Louis, to have a normal childhood where possible.

The family’s home life is said to be pretty average, with Kate and William being very hands on parents and relying on few staff.

However, posing for official photos, trips to Buckingham Palace and visits from celebrities, including Sir David Attenborough, are just a handful of the things which are, of course, far from ‘normal’.

But a royal expert has claimed that after struggling with the weight of his future when he was a child himself, William was keen to protect his son as much as possible.

Even as children, Wills and his brother Harry were well aware of their futures and the younger Wales brother used it in arguements.

According to former protection officer Ken Wharfe Harry once told his brother: “You’ll be king one day, I won’t. Therefore I can do what I want!”

Speaking about his son, William has previously said: “There’ll be a time and a place to bring George up and understand how he fits in, in the world.

“We are very normal.”

Catherine Mayer, author of Charles: The Heart of a King, told E! News: “With George they are trying to delay that moment of realisation and give him normality before they thrust this on him.

“But it will be, nevertheless, part of his upbringing both in terms of what he sees his parents and grandparents doing and probably quite soon a beginning of an understanding that he is in public life and what that means.”

However George definitely knows he’s a prince, as his school pals reportedly call him PG, which is short for Prince George.

George lives with the rest of the Cambridge family in Apartment 1A of Kensington Palace.

He’s a student at Thomas’s Battersea private school in London, which Charlotte also attends and Kate and William are regulars on the school run.

Following in his great-grandad’s, grandpa’s and father’s footsteps, he’s already very interested in the environment and loves being outside.

He’s so passionate about it that the young royal struggled to watch a documentary about extinction.

During an interview his dad William explained:” Having watched so many David Attenborough documentaries recently with my children, they absolutely love them, the most recent one – the extinction one – actually George and I had to turn it off, we got so sad about it halfway through.

“He said to me you know I don’t want to watch this anymore, why has it come to this and you know he’s seven years old and he’s asking me these questions already, he really feels, it and I think every 7-year-old out there can relate to that.”

Health Pointers for the Fitness Women

How Prince William plans to modernise monarchy after taking the throne