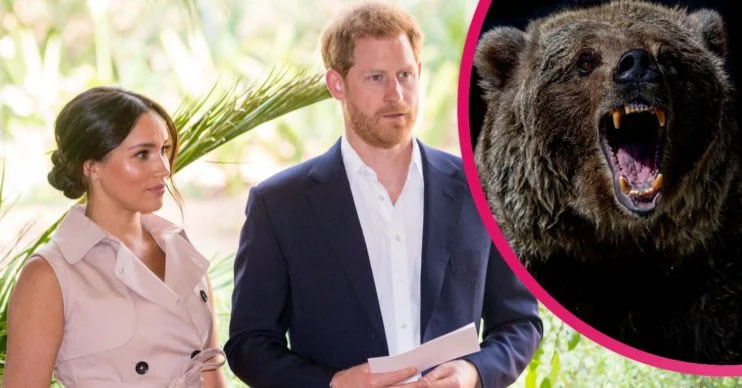 In the latest Prince Harry and Meghan Markle news, it’s been reported that the couple could be under threat – from a pretty unlikely source.

Apparently a huge bear has been spotted lurking near their home in Montecito, California.

And it’s apparently already gone on a killing spree, eating many of their neighbour’s beloved pet chickens.

A giant black bear was captured on home CCTV system of Penelope Bianchi, who lives in the same exclusive gated community as Meghan and Harry.

She said that same night eight of her pet chickens were savaged to death in her garden.

The interior designer told The Mirror: “We were having dinner outdoors and heard the chickens making a commotion.

Please, please Meghan and Harry, get these devices so your chickens are safe and the bear is safe.

“It’s a good thing we were at home otherwise we’re sure the bear would have broken into the garage to finish off all the chickens.”

She then urged Harry and Meghan to get their own security system set up in their garden.

Penelope pleaded: “Please, please Meghan and Harry, get these devices so your chickens are safe and the bear is safe.”

Harry and Meghan have rescued chickens

If you cast your minds back to Harry and Meghan’s interview with Oprah Winfrey, the couple showed off their chickens.

In the only scenes filmed at Harry and Meghan’s £11 million home, they are shown gathered in the chicken’s coop.

Meghan then explained that they were all rescued chickens. And that it was part of her and Harry’s desire to get “back to basics”.

She told Oprah: “This kind of stuff is so basic, but it’s really fulfilling and about getting back to basics.”

Meanwhile Meghan just showcased her baby bump during a speech for VAX LIVE.

While sitting at her garden bench, the Duchess of Sussex urged for global vaccine equality.

Her powerful speech included: “My husband and I are thrilled to soon be welcoming a daughter.

“It’s a feeling of joy we share with millions of other families around the world.

“When we think of her, we think of all the young women and girls around the globe who must be given the ability and the support to lead us forward.”