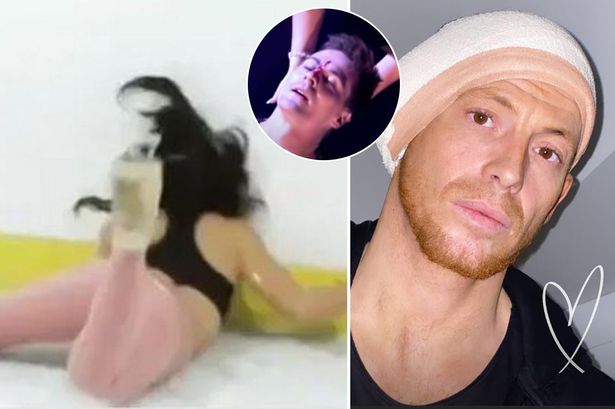 Dancing on Ice 2021 is launching later this month, much to the delight of excited ITV viewers.

Presenters Phillip Schofield and Holly Willoughby will return to host the popular show, and the expert Ice Panel will be back to judge the dances each week.

However, disaster has already struck as Graham Bell’s dance partner Yebin Mok has suffered a painful injury ahead of the launch this weekend.

The professional skater has reportedly sustained a laceration to her tendon after being “stabbed” with a skate blade.

Daily Star has explored the ITV competition’s goriest accidents from over the years.

Actress Jennifer Ellison suffered a horrific accent live on television when she took part in the show in 2012.

She sliced the top of her head open with her skate blade in the middle of her routine, but the star still managed to finish her dance.

Jennifer was then rushed backstage for medical attention as she had blood pouring from her head.

Her professional partner Daniel told host Phil Schofield at the time: “Jen is so flexible she did the Scorpion kick and hit the heel of her skate into the back of her head.”

Matt Evers gets slashed on the face

Professional skater Matt Evers was slashed in his head during a rehearsal for a live performance in 2012.

His partner, Hollyoaks actor Jorgie Porter, accidentally sliced open his face as they performed a dangerous stunt on the ice.

The move saw Jorgie bring her legs up around Matt’s neck, but she slipped and her skate went across his face.

Matt was taken to hospital and stitched up, but was able to perform the routine soon after the incident.

The rapper, who took part in the 2011 series, fell so hard he cracked open his eye.

Blood began gushing from the painful wound, and he was rushed to hospital with concussion and needed several stitches.

Thankfully his sight wasn’t impaired by the freak accident and he was able to continue with the competition.

Former goalkeeper David Seaman dropped his partner Pam O’Connor when they were attempting to perform the notorious headbanger during his 2006 stint on the show.

The move sees the female dancer swung around by her feet, her face dangerously close to the ice throughout.

Unfortunately David slipped and brought her too close to the ice, slicing her chin open in a shocking TV accident.

Professional skater Pam was rushed to the hospital and was forced to undergo stitches on her chin. She returned to the ice soon after.

The late Keith Chegwin only lasted one day on the ice when he starred in DOI 2011.

Keith, who was an actor and television presenter, took a nasty tumble which left him with three cracked ribs and a broken shoulder.

The star had painfully broken shoulder in three places and was forced to quit the show.

He was invited to take part again in 2012 and made it to week seven.

The Only Way Is Essex and Diva Forever star Gemma Collins famously took a tumble during one of her Dancing On Ice routines in 2019.

Her dramatic fall went viral online as she had managed to get up and continue her routine despite hurting her knee.

Gemma later revealed that she had damaged her knee, which she says still hasn’t fully healed.

In December 2019, the media personality told the Express: “It’s only recently I’ve been able to touch my knees again. They were very painful. I mean my knee has just slightly gone down. I’ve got a lot of fluid on my knee from Dancing On Ice.”

Vanessa Bauer smashes her face into the ice rink

Professional skater Vanessa Bauer was forced to miss an episode of Dancing On Ice 2020 when she injured herself after a horrifying accident.

Vanessa, who was partnered with Diversity star Perri Kiely, crashed head-first into the ice rink during an intense day of rehearsals.https://get-latest.convrse.media/?url=https%3A%2F%2Fwww.dailystar.co.uk%2Ftv%2Fdancing-ices-goriest-ever-accidents-23313446&cre=bottom&cip=55&view=web

She shared a scary video of her painful fall and told her concerned fans: “Although I feel ok I am not allowed to skate this weekend… After banging my head into the wall I feel fine but @itv is super cautious and really takes care of us skaters which is why I went through SO many tests… For the sake of my health, I have to rest my brain.”

Luckily Vanessa was given the all-clear to perform again the following week.

Former EastEnders actor and television presenter Joe Swash won Dancing On Ice 2020, but not before he suffered a painful injury to his ear.

During rehearsals, Joe’s partner Alex Murphy accidentally sliced his ear with her skate.

Days before the final, Joe was rushed to hospital for emergency surgery after his wounded ear became infected.

He had to wear a huge bandage on his head until the final, but that didn’t stop the media personality from winning the series.

Avengers Star Gwyneth Paltrow Has Decided To Quit Acting: “I Haven’t Been Comfortable Being A Public Person”

Carnivals Around The World