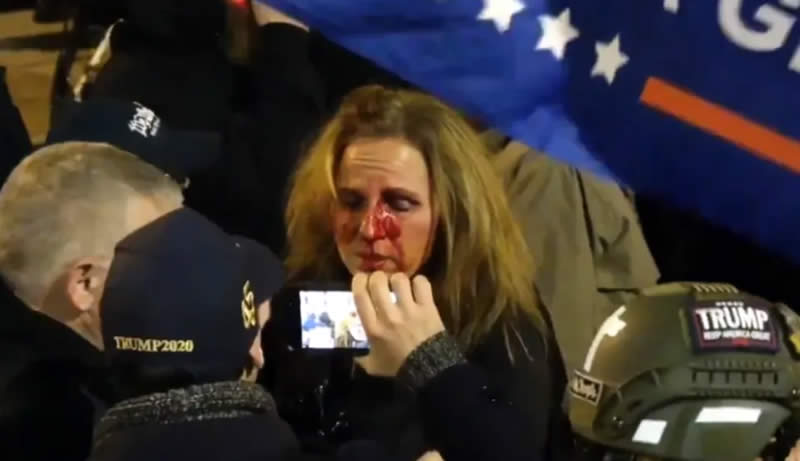 Listen: The attempted coup at the U.S. Capitol on Jan. 6, was a terrible event. Terrible. It was treasonous, horrifying and an undeniable threat to American democracy.

That being said, the fallout has been funny as hell.

Ever since the mob of angry white people stormed the Capitol building like it was hosting a clearance sale on Birkenstocks and UGG boots, the FBI, U.S. Marshals and, I’m sure, other law enforcement agencies have been rounding up attackers—affectionately referred to as the “Coup Klutz Klan” by The Root’s Michael Harriot—and charging them with crimes, because it turns out that storming the U.S. Capitol in an attempt to overthrow the government is, among other things, illegal AF. It’s also the kind of thing that will lose you your job.

A Massachusetts woman found out the hard way that being caught on camera participating in what white people must have thought was White People Day—or what I affectionately refer to as “Caucasi-D-Day”—is a sure-fire way to catch a pink slip. What makes it more hilarious is that she was fired from her job after being outed on social media by her own daughter.

So basically, KK-Karen, aka Bloody Brenda, aka Can’t-Coup-right Carol, raised an honorable child who will likely never show up to Thanksgiving dinner again. After all, she didn’t just put her mother on blast, she pointed out family members seen at the Capitol like they were suspects in the case of Washington vs. White People White Peopleing and she was the star witness.

“Hi this is the liberal lesbian of the family who has been kicked out multiple times for her views and for going to BLM protests to care what happens to me so: Mom: Therese Duke Uncle: Richard Lorenz Aunt: Annie Lorenz,” Helene wrote in another tweet that featured photos of protesters—presumably her relatives—including one of her mother looking like she just got Nate Robinson-ed after hopping in the ring with the wrong Black woman.

Helene said in an interview with CBC’s As It Happens that her mother was fired from UMass Memorial, not because of her involvement in the protest-turned-whitey-rampage, but “because she does work at a hospital and she obviously went to a protest with many people and she wasn’t wearing a mask.”

UMass Memorial released a statement saying, “Over the past 24 hours we have received numerous expressions of concern through social media regarding a UMass Memorial caregiver who may have been involved in this week’s violent events at the nation’s Capitol. The employee in question is no longer a part of our organization.”

Regardless of why Nancy Nosebleed was fired, Helene told CBC that she feels she did the right thing by calling her mother out.

“I think a lot of it came from the fact that it was just very hypocritical, and what she was doing in this video was incredibly wrong,” she said. “Seeing the video and seeing all the people and the FBI asking for identification of the individuals in the video, I decided after a lot of processing—because, of course, it’s emotional and it is my family—I decided that this is the right thing to do.”

“When I had told her I would be going to Black Lives Matter protests…she told me that I wasn’t allowed to go because she believed that Black Lives Matter was a violent organization and they were going to incite violence and that I would have been in harm’s way,” she said later in the interview. “I ended up going anyway. When she found out that I did so, she told me that I was unwelcome in the house if I were to do these things.”