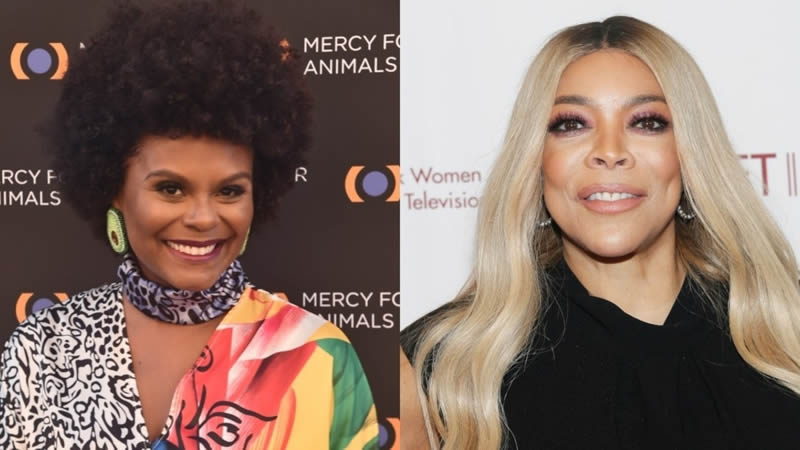 THE ACTRESS AND INFLUENCER PRAYED THAT WENDY AND OTHER CRITICS OF HER RETIRING HER HUSBAND WOULD FIND THE TYPE OF LOVE THAT WOULD HELP THEM UNDERSTAND WHY SHE’S DOING IT.

If there’s one thing you can’t take from Tabitha Brown, it’s her magnetic smile. She kept it on as she responded to Wendy Williams, and a host of other critics online, who have a lot to say about her decision to retire her husband from the LAPD.

In case you missed it, Brown put out a video over the weekend announcing that after years of struggling to make her Hollywood dreams come true, The Chi actress was now doing so well she could help her husband, Chance Brown, turn in his badge.

It’s a feat that she wrote down years ago and promised him she would make happen, so it was understandable that it was a moment she wanted to celebrate and offer praise over.

But Williams wasn’t in the celebratory mood regarding the news. She mentioned Tabitha’s accomplishment as part of her Hot Topics on Thursday’s (July 1) episode of The Wendy Williams Show.

After playing part of Tabitha’s video, she immediately shook her head in disapproval, bringing up her ex-husband, Kevin Hunter. The couple was married in 1997 and Williams filed for divorce in 2019 after he carried on a relationship with another woman whom he welcomed a child with during the marriage.

“I predict that this marriage is going to be on real rocky ground in a moment. ‘Live your dream’… They may invest in stuff and lose the money. They invest in something else then the money gets swindled or stolen. Then they invest again and he comes home and throws his bag down.

She’s like ‘What? What?’ And he’s like, ‘I can’t do this and this is your fault. You’re over here making your money and stuff and had me quit my job.’”

“No, you work!” Williams added. “Being a cop was a big part of his identity, he liked it but she came to him and said that.”

Tabitha caught wind of what was said after getting phone calls off the hook from people about Williams’ comments.

Instead of responding with negativity, in an IGTV video, she sent love the talk show host’s way, as motivational speaking is a big part of the star’s brand. She made it clear that Chance is not like a Kevin Hunter.

She went on to note that Chance took his job with the LAPD to help support her dream and provide for their family. As she mentioned in her initial video, they agreed that she would eventually take him out of the force when she made it so he could pursue his own dreams.

However, God has blessed me…I’ve been praying on this for a very long time and it has now come to pass. That is the power of God. It’s also the power of allowing God to be first in your marriage.

That’s how it remains successful, we keep Him first. He is first in our marriage. Not money, not business, not success, but God. He’s first.”

She then prayed that Williams, who has been open about dating again, would receive a different kind of love. She prayed for a love to find Williams that “holds you tight.

I pray that somebody loves you enough to sacrifice their life for you. I pray that type of love finds you so that you can understand why I don’t want my husband to put his life on the line anymore, wearing a bulletproof vest if he don’t have to, and if it’s not his desire.”

Tabitha went on to say that she wants Chance to continue coaching children and build up his nonprofit, doing the things that he’s passionate about and that keep him out of harm’s way.

She maintained her excitement for this next chapter for him and prayed again that the host would someday be able to feel that same joy. Nothing about it was shady, but truly, a kind and compassionate message.

“I pray that somebody finds you, love finds you that excites you the way I’m excited for my husband to grow his business, pour into children and coach these kids and do other things he’s dreamt about,” she said.

“I pray this type of excitement and love finds you and anybody else who seems to not understand this. I pray that type of love finds you.”