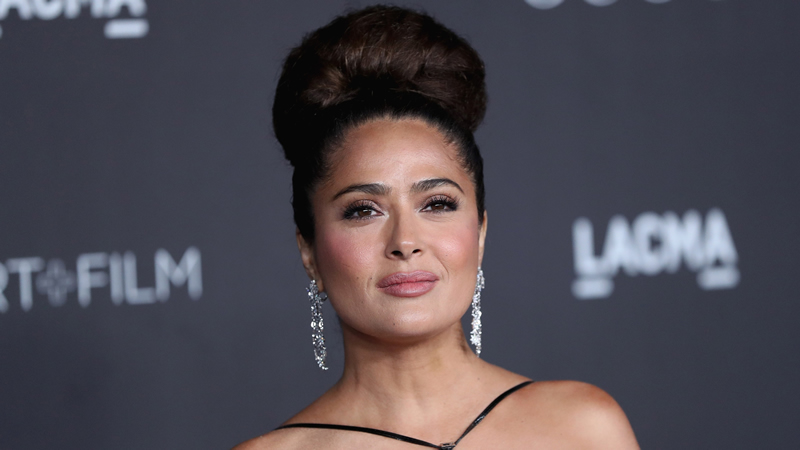 The actress participated in a viral dance challenge promoting her new film, The Hitman’s Wife’s Bodyguard.

Salma Hayek is showing off her best dance moves to promote her new film, The Hitman’s Wife’s Bodyguard.

Today, the Frida actress shared a quick video clip on Instagram featuring herself and a crew of dancers taking part in a bit of choreography tuned to Britney Spears’s iconic debut single, “…Baby One More Time.”

The hit 1998 song is featured in Hayek’s upcoming film, and a new dance trend, aptly dubbed the #HitmansChallenge, features people dancing along to Spears’s iconic moves from her original music video.

Hayek, who is usually draped in designer garb or sultry swimwear (based on her social media presence) dressed down for the dance session, wearing a black V-neck top, matching yoga pants, and athletic sneakers.

The star’s dance skills are highly impressive in the short clip, and she even manages to execute some of Spears’s classic moves, including a flawless fan kick, multiple hair whips, and a death drop.

Hayek stars alongside Ryan Reynolds and Samuel L. Jackson in the upcoming sequel to 2017’s The Hitman’s Bodyguard. After a brief cameo in the original action film, director Patrick Hughes listened to fan feedback demanding to see more of Hayek’s character, Sonia Kincaid, in the sequel.

“Quite frankly, I was shocked,” Hayek told Variety. “I’ve been in many movies where we get the call: ‘Oh, my God, you’re one of the most liked characters in the film.’ So many times. But for the first time, there was a director that said, ‘I’m gonna listen to the audience.'”