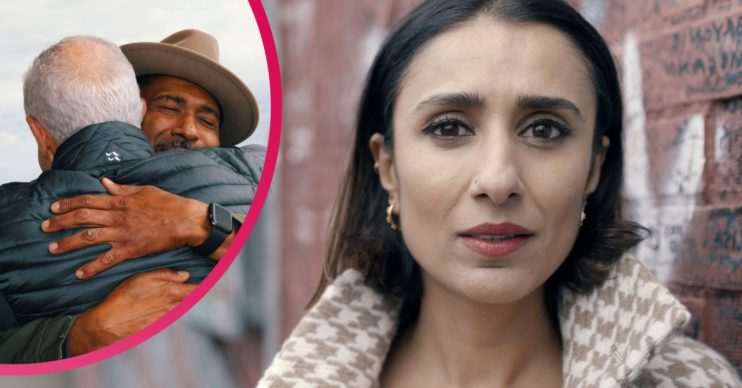 Saved by a Stranger on BBC Two meets people whose lives have been changed by someone else in an extraordinary way – but who is host Anita Rani?

What’s the show about? And how many parts is it?

Here’s everything you need to know…

Presenter Anita Rani presents this new series that sets to reunite people caught up in traumatic events with someone who helped them get through it.

The first episode concentrates on Karl, a trainee clinical psychologist who was weeks away from graduating when he took a Piccadilly Line tube in London on July 7 2005.

A bomb went off “four or five seats” away from him and 26 people died in his carriage.

He made it out alive, thanks in part to the support of the mystery woman who comforted him in the dark smoke-filled carriage.

In the darkness and confusion, a woman reassured him and they held hands.

To his shame, he later edged ahead of her on the way to safety.

We also meet Emina, an NHS researcher living in Nottingham, who was evacuated from Sarajevo when she was four.

She longs to thank the doctor who arranged her family’s escape from the city under siege.

The doctor gave them new lives and she wants to thank them in person.

The heartfelt reunions are just what we all need after a turbulent lockdown lacking in hugs.

How many parts is it?

Saved by a Stranger on BBC Two is four parts.

He has been desperate to find and thank John Shanks, the volunteer at the Landmark Centre in Brixton, who helped him through his darkest hour.

Also, Peter has been searching for his “angel” Betsy.

She is the rehabilitation nurse who cared for him after he was shot in his own home in Belfast in 1979 during The Troubles in a tragic case of mistaken identity.

He has never forgotten her kindness towards him during that painful time.

How can I watch it?

This programme will be available on iPlayer shortly after broadcast.

Who is Anita Rani and what is she famous for?

Anita Rani is a radio and television presenter who works mainly for the BBC.

In 2012, she took part in BBC’s Great Sport Relief Bake Off, and went on to win the competition.

She took part in Strictly Come Dancing in 2015, and was partnered with Gleb Savchenko.

They reached the semi-final.

Rani went on to host the 2017 Strictly tour around the UK.

Since 2015, she has co-hosted BBC’s Countryfile.

How old is Anita Rani?

She is currently 43 years old.

Who is Anita Rani? Is she married?

Bhupinder is a technology executive for an advertising agency.

In 2020, she opened up about the overwhelming support she received after having a miscarriage.

She suffered a miscarriage in December 2018 and believes it’s an “important subject to talk about”.

Anita first opened up about her miscarriage when she wrote for Red magazine.

She said: “It took me a long time (an entire year) to recognise and accept my sadness.

“For the first time in my life, I gave myself permission to not be okay, and to be okay with that.

“All year I had been trying to fight this unknown person, but I realised it was just me the whole time, the real me, needing to be heard, craving a cuddle.”

Meghan Markle & Prince Harry To Talk About Estrangement From The Royal Family With Oprah Winfrey?