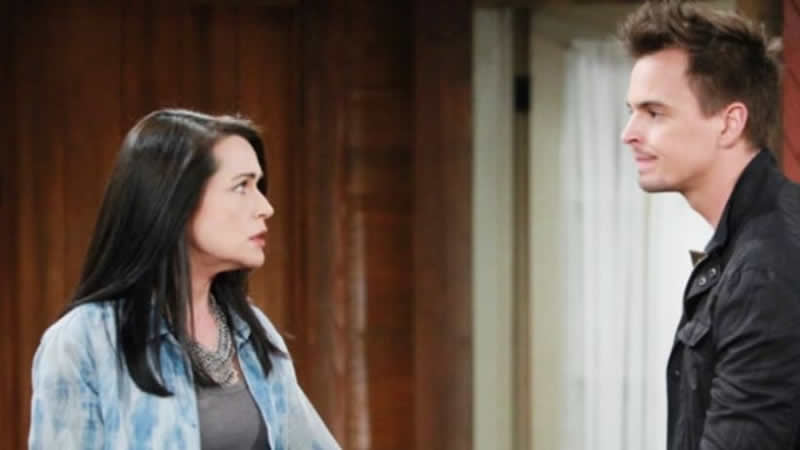 The B&B spoilers for July 12-23, 2021 reveal that Quinn Forrester (Rena Sofer) will be back to her old ways in no time. She is already trying to jump back into bed with Carter Walton (Lawrence Saint-Victor).

Quinn just can’t resist him, especially when he’s shirtless and sweaty from his workouts. Fans can’t wait for “Quarter” to heat up their televisions once again.

Their affair led to the end of Quinn’s marriage with Eric Forrester (John McCook). Everyone has been talking about their hot-and-heavy session. Wyatt Spencer (Darin Brooks) has a funny feeling about his mom since he lost his trust in her.

B&B spoilers – Quinn and Carter heat up the summer
The B&B spoilers reveal that it does not take Quinn long to jump into Carter’s bed. She’s aware of the deal that Carter made with Eric. Not only will he work for him as his divorce attorney, but he’s also to stay away from Quinn. As fans know, Quinn and Carter can’t stay away from each other long.

They’re already seeing their chemistry play out on the screen once again. Quinn wants Carter’s help, but he’s already working with Eric. Since she can’t get any legal advice, maybe she can get some in-between-the-sheets action from him. Both Quinn and Carter are alone, so they will need some comfort.

Quinn is still dealing with the aftermath of her infidelity. It won’t take her long to return to her dark ways. Quinn can’t help but think how happy Brooke Logan Forrester (Katherine Kelly Lang) is to see her downfall happening.

Does that mean Quinn will get revenge on her archenemy? Or, will she hurt someone close to Brooke?

Paris Buckingham (Diamond White) is not completely off the hook yet. Although she wasn’t the one who spilled the beans at Quinn and Eric’s vow renewal ceremony, she’s still in Quinn’s crossfires.

Fans didn’t like it when Quinn threatened Paris with her job. But now that Quinn is the one without a job, Paris may have to pay.

Wyatt Spencer doesn’t trust his mom?
The B&B spoilers also reveal that Wyatt is not sure what to think about his mom. He’s growing increasingly worried about her bad behavior. Wyatt feels that Quinn is back on the crazy train after the fallout of her divorce. Wyatt knows his mom, so he knows when she’s good and when she’s bad.

Quinn has done some wild things in her past. When Liam Spencer (Scott Clifton) suffered from amnesia, she dragged him into a cabin away from Los Angeles.

She tricked him into thinking he was a man named Adam and she was a woman named Eve. Just like the Bible story itself, Quinn used her snake-charming ways to make Liam fall under her spell.

Wyatt was the one who saw Quinn kissing Liam. So, he has every right to be concerned. Hopefully, nothing on that level will happen ever again. However, it’s hard to tell whenever Quinn goes to the dark side.