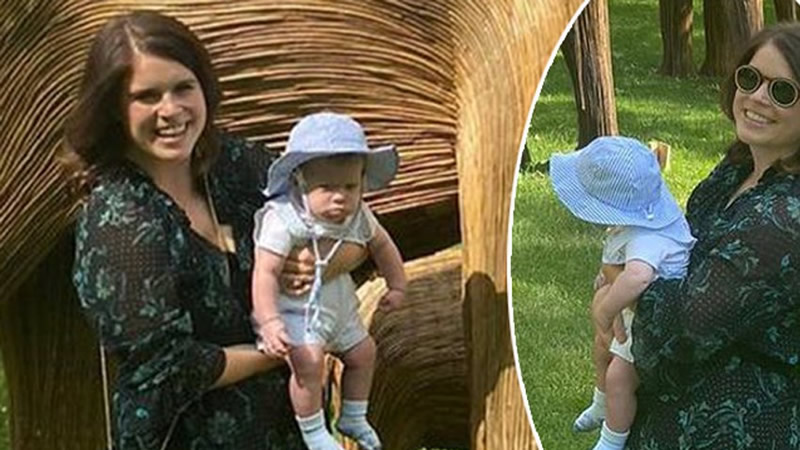 Princess Eugenie, 31, is the patron of the Elephant Family, which has partnered with The Real Elephant Collective to host a six-week exhibition in London’s parks.

One of them, Green Park, the granddaughter of Queen Elizabeth II, and went yesterday with her four-month-old son Augustus.

Evgenia showed the baby wooden statues of elephants and introduced him to the baby elephant, which is the namesake of her son.

“The Tea Timers have a wonderful baby elephant named Assam August, and I was very pleased to introduce him to my August,” she said.

Eugenia’s followers noted that August looks a little surprised in the photo, and that he has grown noticeably. They also thanked Evgenia for sharing with them a part of her personal life and regularly showing her little son.

Since the birth of their son, Eugene and her 35-year-old husband Jack Brooksbank regularly share pictures of the baby on Instagram – August has already become a real star on his mother’s personal blog.

Princess Eugenia, although she is the senior member of the royal family, does not strictly follow the royal protocol, and, despite the fact that the presence of personal pages on social networks for members of the royal family is not welcome, Eugenia in this sense prefers the life of an ordinary person.

Apparently, this circumstance brought her closer to her cousin Prince Harry, who gave up royal life for the sake of family and personal happiness.

“Harry and Eugenie have the closest relationship among the grandchildren of Queen Elizabeth. Like Harry, Eugenie is very loyal, honest and cheerful,” said Omid Scobie, author of In Search of Freedom: Harry, Meghan and the Creation of the Modern Royal Family.