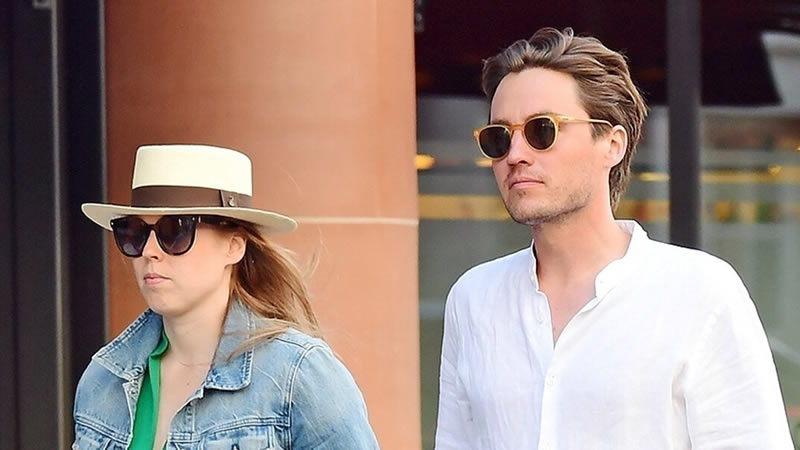 Princess Beatrice and Edoardo Mapelli Mozzi stepped out in London on Saturday, showing off a glimpse of her baby bump, which she lovingly cradled. The royal mom-to-be and her husband of nearly 11 months had lunch outdoors at a restaurant during their outing.

Queen Elizabeth’s granddaughter, 32, looked chic in a green dress under a denim jacket and sneakers paired with sunglasses and a stylish hat.

The couple announced that they were expecting their first child together last month, 10 months after they tied the knot in a ceremony that was scaled down due to the coronavirus pandemic last summer.

“Her Royal Highness Princess Beatrice and Mr Edoardo Mapelli Mozzi are very pleased to announce that they are expecting a baby in autumn of this year,” Buckingham Palace said in a statement announcing the news. “The Queen has been informed and both families are delighted with the news.”

With the wedding, Princess Beatrice became a stepmother to Edo’s young son — Christopher Woolf, known as “Wolfie” — from a previous relationship with American architect and designer Dara Huang.

Beatrice and Edoardo’s wedding (where Wolfie had the important role of pageboy!) marked the first time since Camilla, Duchess of Cornwall married Prince Charles in 2005 that a member of the British royal family stepped into the position of stepmother. Beatrice is the first of her generation — and first grandchild of the monarch — to do so.

The new baby will be Queen Elizabeth’s 12th great-grandchild. Beatrice’s cousin Prince Harry and his wife Meghan Markle welcomed a baby girl they named Lilibet “Lili” Diana in tribute to both the Queen and Princess Diana on June 4.

2021 has been a baby boom for the royals. In addition to Meghan and Harry’s second child and Beatrice’s pregnancy, Princess Eugenie welcomed her first child, a son named August, while Zara Tindall gave birth to her third child, a boy named Lucas.