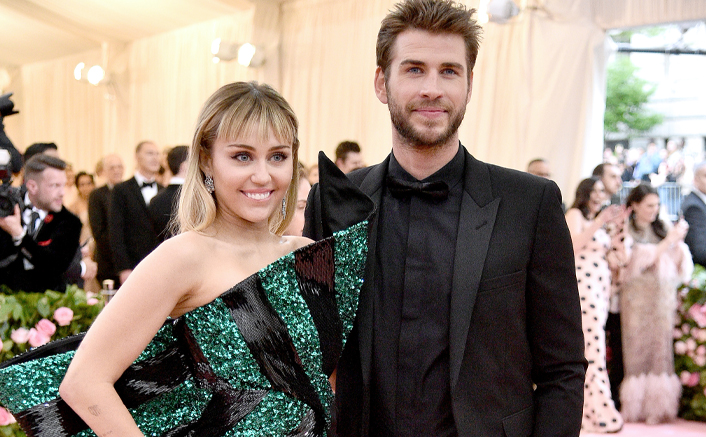 Miley Cyrus and Liam Hemsworth, once upon a time, had a fairytale love story. The romance that began on the sets of ‘The Last Song’ lasted long enough for them to have a story to tell their future generations.

The on and off relationship finally took the shape of marriage only to end up in a divorce in less than a year. I know it will be hard to believe now, but the couple was so much in love that the Midnight Sky singer literally found it difficult to stop herself from licking the actor.

Yes! You heard that right. Miley and her bizarre behaviour are world famous now. Well, we are going to take you down memory lane on the red carpet of the world premiere of Avengers: Endgame, where these two couldn’t get enough of each other. Gosh! They looked so perfect and made for each other back then.

We came across a picture of Miley Cyrus and Liam Hemsworth from the red carpet where the singer was literally trying to lick her then-husband. What a sight it must have been for the onlookers.

Have a look at the picture below:

Talking about their attire, Miley Cyrus was dressed in a custom Yves Saint Laurent dress, which extended to the floor.

The gown featured jewelled accents and matching accessories from Sydney Evan, Jared Lehr and Loree Rodkin. To complete the look, the Wrecking Ball singer wore her hair down in fun, loose waves. She also chose a shade of light pink, shimmery shadow for her eyelids and a light pink gloss for her lips.

The recently married couple coordinated their black outfits. Liam chose to wear a traditional black tuxedo. However, he chose to go without a tie and kept the top buttons of his dress shirt unbuttoned, creating a casual but put-together look.

How happy did Miley Cyrus and Liam Hemsworth look? If only we could go back in time. But these two certainly looked way too happy here and never shied away from PDA.