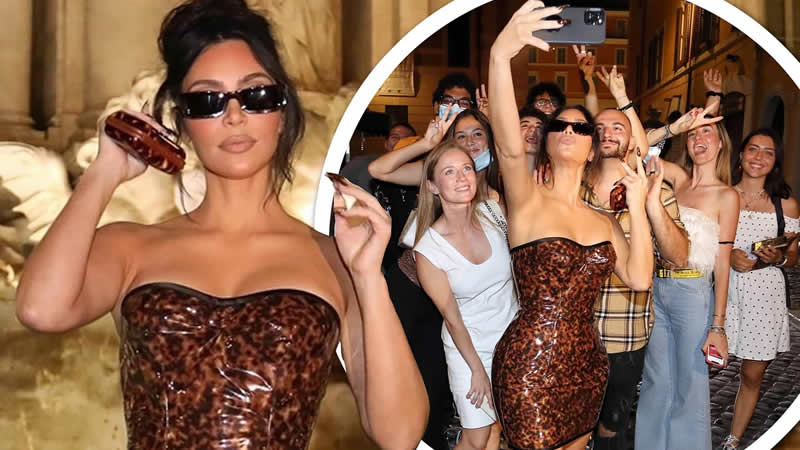 Kim Kardashian does not believe in tourist attire. The KKW Beauty founder, 40, strolled the cobblestoned streets of Rome on June 29 in a PVC leopard-print dress and strappy heels near the Trevi Fountain.

In lieu of a fanny pack, Kim paired the form-fitting dress with a matching leopard-print clutch bag and sunglasses, and she completed the look with an up-do hairstyle.

Flanked by Italian fans and photographers, the Keeping Up With the Kardashians star also stopped to take a group selfie with others near the famous fountain. Kim, who arrived at Italy’s capital city over the weekend on June 27, is reportedly in the country for business meetings, per TMZ.

Upon her arrival, Kim hit up several landmarks with her best friend Tracy Romulus, makeup artist Mario Dedivanovic, and hairdresser Chris Appleton, including the Colosseum and the Vatican.

During her trip to the Vatican with model Kate Moss and her daughter Lila Grace, 18, Kim caused a bit of a stir with her sheer white lace cutout dress, given the strict dress codes of the Sistine Chapel. However, she reportedly carried a trench coat to cover up the ensemble.

Business has certainly been good for the TV personality and businesswoman. Kim announced on June 28 that her shapewear brand SKIMS would supply Team USA athletes with loungewear, undergarments, and pajamas at the upcoming 2021 Tokyo Olympics.

The capsule collection will also be available for all to shop on SKIMS.com. Kim shared the news on her social media accounts, explaining the significance of the Olympics given her former step-parent Caitlyn Jenner‘s prolific run as a gold medal-winning decathlete.

“Ever since I was 10 years old, I’ve heard every single detail about the Olympics from my stepdad,” Kim wrote. “As I would watch the athletes compete, I would grow to understand the dedication and honor being a part of the Olympics embodied.

I traveled w my stepdad and family to all different cities for the Olympic trials, the Olympics and track meets of @caitlynjenner’s and at every stop I would buy an Olympic t-shirt as a souvenir.”

“When I received the call inviting Skims to be a part of @TeamUSA 🇺🇸, every moment I’ve spent admiring the strength and energy of the Olympians from the sidelines came full circle,” Kim continued, adding that she was “honored.”

7 Signs Your Marriage is Over