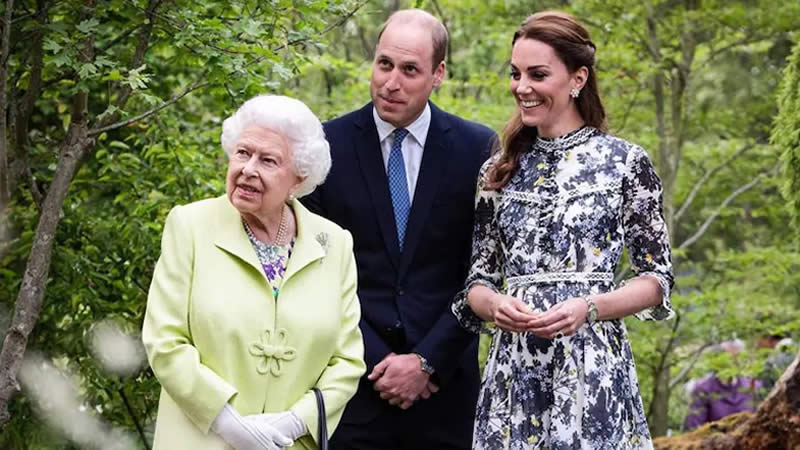 KATE Middleton and Prince William wished the Queen a happy 96th birthday in a touching message today. The Duke and Duchess of Cambridge called the monarch an “inspiration to so many” as they shared sweet family snaps.

One image showed William, Kate, and the Queen at the Duchess’s Chelsea Flower Show garden in 2019. Another saw the Queen and Prince Philip with seven of their great-grandkids in a snap taken by Kate herself.

Meanwhile, Prince Charles and Camilla also shared their own message to the Queen on their Clarence House Twitter page.

The Queen’s eldest son and the Duchess of Cornwall shared several images of the monarch on engagements. A sweet throwback pic showed the Queen with a young Prince Charles and Princess Anne greeting supporters.

“An inspiration to so many across the UK, the Commonwealth, and the world, it’s particularly special to be celebrating in this Platinum Jubilee year.”

her father in 1952, Princess Elizabeth became Queen Elizabeth II aged just 25, and this year is celebrating 70 years on the throne – a first in British history.”

Prime Minister Boris Johnson also paid tribute to the Queen for her “dedicated and faultless service” over 70 years.

Addressing the Queen in a pre-recorded video posted on Twitter, Mr. Johnson said: “I’m delighted to wish your majesty a very happy birthday and to pay my heartfelt tribute to your 70 years of dedicated and faultless service to our country and the Commonwealth.

“Millions of people cherish a particular moment of your reign, and for me, it has to be the opening ceremony of the London Olympics in 2012, when your majesty arrived, at least figuratively, by jumping from a helicopter escorted by James Bond.

“And then the trumpets sounded, and your majesty made your entrance and the entire stadium rose as one and burst into applause. Thousands of people from almost every country in the world, with a billion more watching at home.

“And that fantastic moment showed yet again your majesty’s unique ability to bring people together in joyful harmony.

“And as we look forward to celebrating your Platinum Jubilee in June, our hearts swell with appreciation and pride that your majesty is our Queen.”

Last night, the Queen released a new photo to mark her big day.

Despite health worries, she posed with two fell ponies last month at Windsor. The Queen is at Sandringham for her big day.

It came after Prince Harry sparked a fresh row by announcing on US TV that he is “protecting” the Queen.

The Duke of Sussex claimed on NBC Today he was ensuring Her Majesty has “got the right people around her”.

Palace aides were left reeling by the “breathtaking arrogance” of Harry, who until last week had not seen his gran for more than a year.

In comments beamed around the world, Harry, 37, said he was not sure whether or not he would take up the invitation to attend Her Majesty’s Platinum Jubilee in June — blaming “security issues” and “everything else” for his indecision.

In the interview with presenter Hoda Kotb at his Invictus Games, the father of two also revealed private details of his and Meghan’s secret “clear the air” conversation with the Queen and Prince Charles at Windsor Castle last Thursday.

It was the first time the Sussexes had seen Her Majesty together in more than two years since they left the UK for a new life in California.

How To Reduce Anxiety Without Medication

What Happened Between Nicole Kidman And Michelle Pfeiffer?