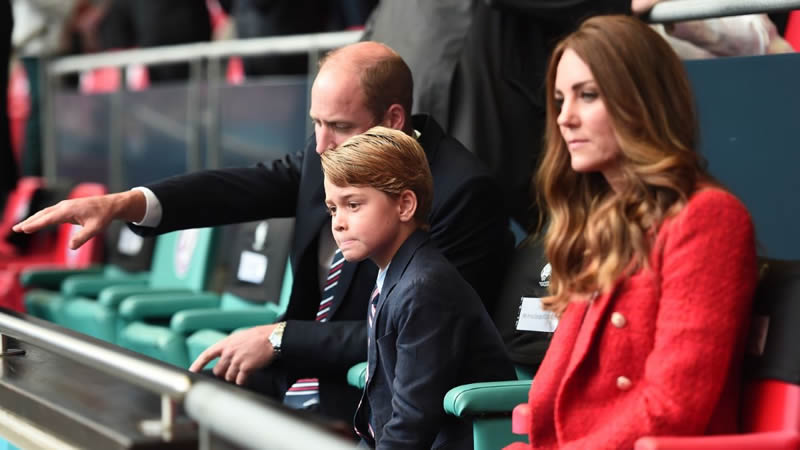 Kate Middleton is perfecting her go-to parenting move on her son, Prince George, and we almost missed it (again).

Over the weekend, the 7-year-old joined the Duke and Duchess of Cambridge to cheer on England during the Euro 2020 finals (which were postponed due to the coronavirus pandemic).

On Sunday, the family of three showed support for the country’s team during the football (soccer, to us Americans) match against Italy held at Wembley Stadium in London.

For the occasion, George matched his father, who is President of the Football Association, in a navy suit, a blue shirt, and a striped tie.
The Duchess of Cambridge opted for a white blazer and top.

At one point during the game, Middleton performed her unique parenting trick when speaking to her eldest son: She bent down to meet his eye level.

Oh, and we should also mention that Prince William borrowed the move when George asked a question.

We’ve seen the mother of three use the tactic a handful of times over the years. In fact, the most recent was during a football match last month.

And the duchess doesn’t just use the parenting trick on her own children—including Charlotte and Louis. We have also seen her do it during a variety of royal engagements, even when she meets fans throughout the U.K.

What does the move actually do? Well, it reduces dominance over youngsters and encourages them to communicate openly and freely. Although she sometimes performs it while sitting down, she tends to do it while she’s standing, so she can lean over to reach the eye-line of whatever child she is speaking with.

5 Ideas To Wear Your Boyfriend’s Clothes