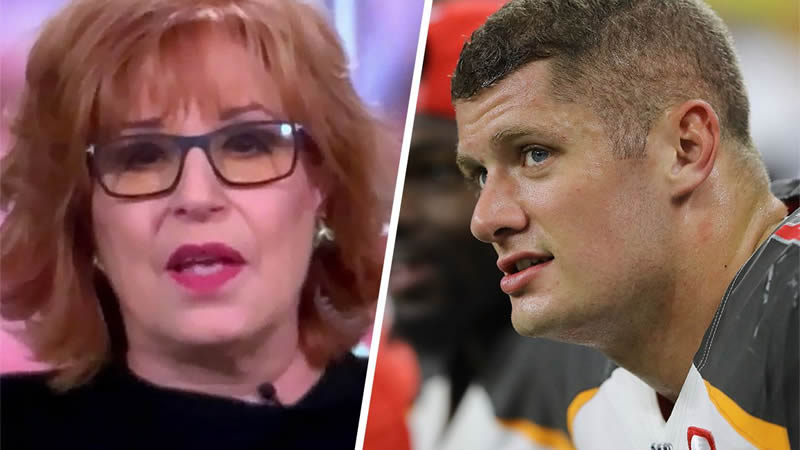 The View host’s sense of humor remains firmly planted in 1985.

Joy Behar stepped in it Tuesday morning on The View when she made an offensive joke about Carl Nassib, the first active NFL player to come out as gay. Behar didn’t seem to think anything of the joke at first — although Meghan McCain could be seen cringing after the fact — but producers clearly did, as the co-host apologized for making an “inappropriate joke” just a few minutes later.

Behar made The View’s discussion about Nassib, who came out in an Instagram video posted Monday afternoon, weird from the get-go, as she repeatedly asked her co-hosts why this is “such a big deal” in the year 2021 (Whoopi Goldberg was out, so Behar filled in as moderator). The ladies ignored the comment and instead reminded viewers, and Behar, that Nassib’s announcement is crucial for “representation,” particularly for LGBTQ+ kids who may not see themselves reflected on the field.

When Ana Navarro said that she “may even watch a football game every now and then” following Nassib’s announcement, Behar chimed in with an extremely poorly-timed joke. “Ana, after they said ‘penetration in the End Zone,’ they lost me,” she said, as her co-hosts plugged their ears and laughed awkwardly. McCain could even be seen cringing and glancing towards what I imagine is a producer off-screen.

After the discussion made it around the panel, Behar apologized for the offensive remark. “By the way, that inappropriate joke I made for daytime television, scratch it,” she said, failing to recognize exactly WHY the joke was ill-advised. “Make believe I never said it.”