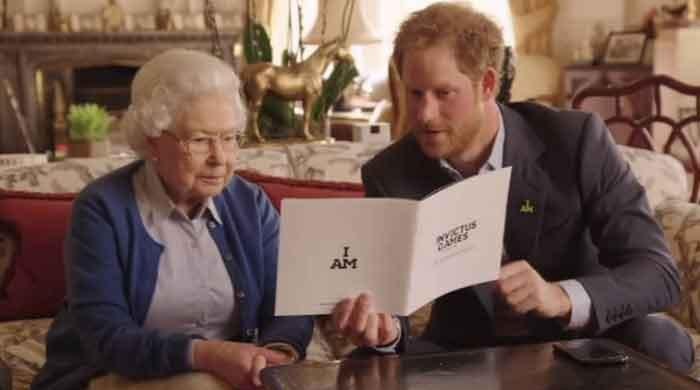 Queen Elizabeth turned 95 this past Wednesday, and despite the fact that he was in the United Kingdom last week for Prince Philip’s funeral, Prince Harry did not stick around for it and instead flew home the day before.

He is said to have left in a huff because nobody in the family wanted to talk privately with him because every time they did, it got leaked to the press.

Can you blame them?

So Harry left the day before his grieving Grandmother’s Birthday – which was bad enough…But his nasty behavior actually got worse when he returned home.

On the day of the Queen’s birthday, Harry was spotted having lunch in Hollywood with a major L.A. power player.

Page Six reported that Harry was seen having lunch on Wednesday at the exclusive Hollywood club San Vicente Bungalows with Wallis Annenberg, who is known as the queen of Los Angeles philanthropy.

“They sat outside, far from other people, and Harry came in wearing a mask,” a source said.

Annenberg, 81, is the head of her family’s multibillion-dollar Annenberg Foundation. On top of that, she is on the boards of USC, the LA County Museum of Art, and LA’s Museum of Contemporary Art. The club where they ate has a strict policy against cellphones, photos, and leaks, punishable by permanent expulsion.

“It’s just too juicy — I had to divulge,” the source said.

Harry raised some eyebrows when he flew back to California on Tuesday, choosing not to stay one more day for the Queen’s 95th birthday on Wednesday. Page Six reported that the “conflicted” Harry decided that it was more important to travel home to California to see his pregnant wife.

This birthday was a difficult one for the Queen, as it comes less than two weeks after she lost her husband of 73 years.

“I have, on the occasion of my 95th birthday today, received many messages of good wishes, which I very much appreciate. While as a family we are in a period of great sadness, it has been a comfort to us all to see and to hear the tributes paid to my husband, from those within the United Kingdom, the Commonwealth, and around the world,” she said in a statement to mark her birthday.

“My family and I would like to thank you for all the support and kindness shown to us in recent days,” the Queen added. “We have been deeply touched, and continue to be reminded that Philip had such an extraordinary impact on countless people throughout his life.”