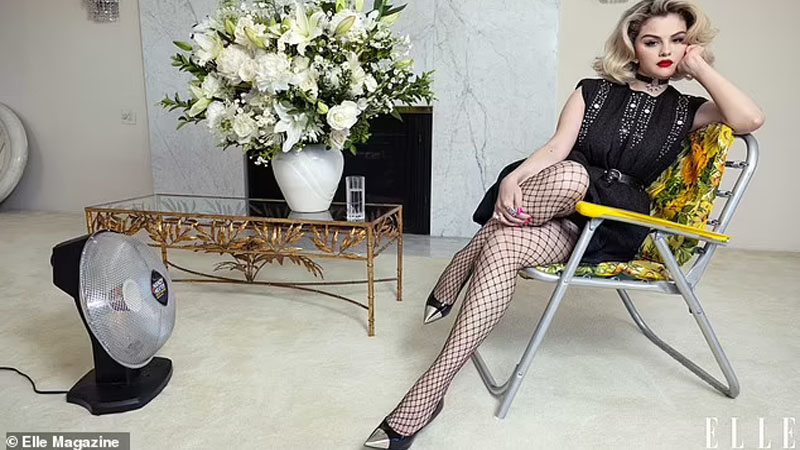 ‘Lose You To Love Me’ singer Selena Gomez is having a Marilyn moment. The star exudes Old Hollywood glamour on the cover of Elle’s September 2021 issue, pairing blond waves with a classic red lip.

The “Lose You To Love Me” singer, 29, draped herself across a bed for the pinup-style photoshoot, sporting Falke fishnets and a pink tweed Chanel skirt.

She completed the look with a modern touch, donning a printed Chanel T-shirt and choker.

Inside the mag’s first-ever Latinx issue, which Gomez guest-edited, she modeled a series of 1950s-inspired styles, ranging from a lacy Gucci dress to a polka-dotted, off-the-shoulder frock by Prabal Gurung.

For another black-and-white shot, she struck a pose in a fuzzy Chanel sweater and curve-hugging pencil skirt.

While Gomez returned to her natural brunette shade after going platinum in April, she mirrored Monroe’s signature cut and color for her Elle shoot.

Gomez, who stars in the upcoming Hulu series “Only Murders in the Building,” even rocked a sexy spin on argyle knits, pairing a cropped Alessandra Rich sweater and matching hot pants with fishnets.

The Rare Beauty founder – who wore makeup from her own line on the cover– discussed her new role in the accompanying interview. During filming, she recalled washing her mouth out with Listerine after each kissing scene in order to comply with COVID regulations.

“It burned my mouth,” she said. “I was like, ‘I want to throw up.’ I’ve never experienced a set like that.”

Ways of Attracting Guys at the Beach