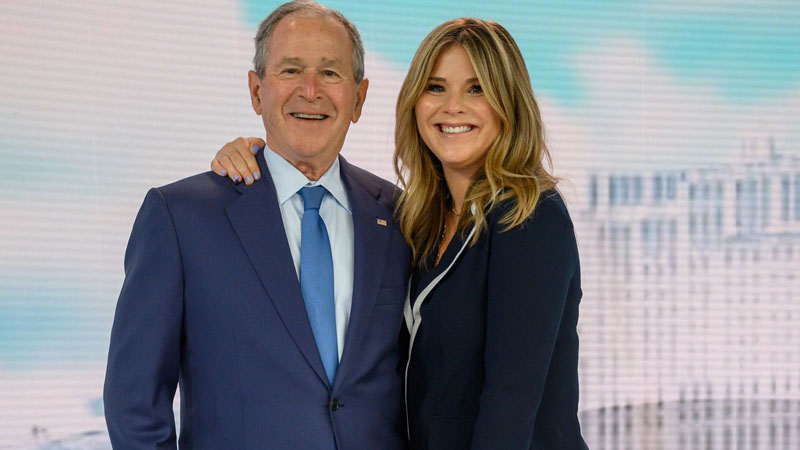 Since his presidential stint, George W. Bush has developed a knack for painting—and a pretty impressive one at that. He’s crafted portraits of many people including Arnold Schwarzenegger and the immigrants featured in his new book, Out of Many, One, but there’s one subject he generally stays away from—the Bush women.

“His biggest fear is painting his family—the women in his family,” his daughter and Today With Hoda & Jennaco-host Jenna Bush Hager said on the April 28 installment of her show. But he had to face his fears eventually, so he started by painting his wife, Laura Bush.

“That was a bust, and that painting was destroyed,” Jenna said. Next, he painted Jenna, and her reaction said it all. “Oh… is that what I look like?” she said as a picture of the portrait flashed on-screen, Hoda Kotb laughing in the background. “Is that what my face looks like? I’m just wondering.”

On April 20, George and Laura visited Today to catch up and talk about his book. (He showed off his art skills then too in a game of “Presidential Paintionary.”) “When he was here, he told Hoda that I hate the painting, and I don’t hate it,” Jenna said. Hoda chimed in: “But he did ask me if I wanted it because you didn’t like it.”

Despite Jenna’s hesitation, Today fans loved George’s work. “It’s such a beautiful painting of you. No, it’s not how you look, but it’s lovely just the same,” one viewer commented on Instagram. “I love the painting Jenna! It’s a rendering of you, he captured the beauty he sees in you❤️,” another added. “It depicts your spirit exactly and that’s what he sees,”another wrote.

The painting was a nice gesture, but both Hoda and Jenna thought it would be a little odd for either of them to hang it in their homes. “Who’s gonna hang a portrait of themselves in their house?” Jenna asked. “Not me.” Hoda agreed: “Yeah. You’re the last person.”

A portrait Jenna would hang in her house, however, is one of her youngest child, son Hal, which her dad painted beautifully. She shared a picture of it on Instagram in January. “My favorite Christmas gift,” Jenna captioned the post. “My Hal painted by his Jefe. @georgewbush Love how you see our precious boy. These bring me joy.”

Portia De Rossi and Ellen DeGeneres Splitting, ‘Behind’ After Disputes Over Career?