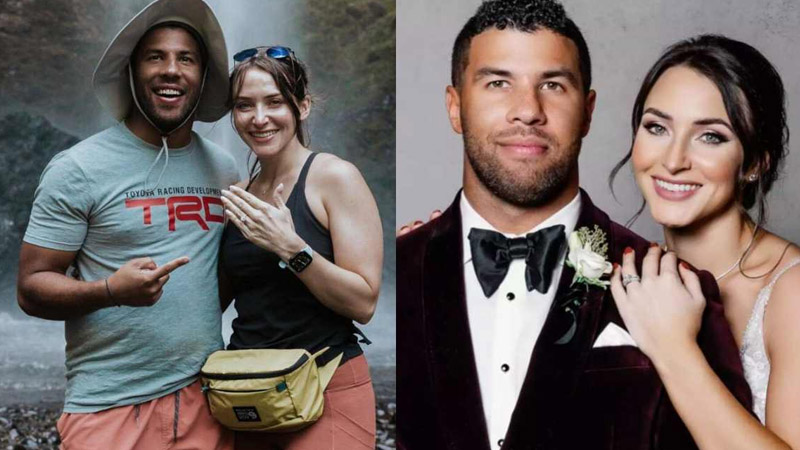 “We have so much fun together,” the NASCAR driver tells PEOPLE of his now-wife, whom he wed on Dec. 31 in Charlotte, North Carolina

Bubba Wallace and Amanda Carter are getting married in the new year!

On December 31, the NASCAR driver, Darrell Wallace Jr., and his long-time love exchanged vows in front of 250 guests at the JW Marriott in Charlotte, North Carolina.

“Getting married, and starting a new life together, I’m just so excited to have a good one in my corner,” Wallace tells PEOPLE. “We have so much fun together.”

The couple, who got engaged in July 2021 after five years of dating, chose all-white flowers with greenery accents and candles for their “intimate and romantic” wedding, which was planned by Fabulously Created Events.

“We wanted the ceremony, (which was held on the hotel’s 4th floor) to be formal, and then as soon as you walk down the staircase to the reception, we wanted the whole mood to flip,” says Carter. “The flowers are changing from white to vibrant with pinks, purples, and reds, with a lot of sparkles and shine in the room. We wanted the reception to feel like a New Year’s Eve party.”

The bride went down the aisle in a Madam Burcu Couture gown and Lola Cruz heels, while Wallace donned a custom dark red velvet tuxedo designed by Stitched by Mitch.

The couple knew they didn’t want a formal setting for the main course.

Instead, the newlyweds chose four tapas-style stations with some of their favorite foods such as Italian, Asian stir fry, burgers, and tacos.

“The food will be really fun,” Carter said ahead of their wedding. “We just really wanted it to be a fun atmosphere, not stuffy, even though everyone’s going to be dressed up. We wanted a more casual food setting since it was late in the evening. And then at 1 a.m. when the party’s over, we have a McDonald’s food truck coming to serve chicken nuggets and french fries.”

Wallace and Carter made certain that the music for the evening’s DJ was appropriate for the occasion.

“We were on a road trip recently, and the entire four-and-a-half-hour car ride we just went through and picked songs,” says Carter of their list which included classics, ’90s hits, hip hop, and EDM.

Adds Wallace: “I love dancing. It’s got to be the right vibe.”

To end off the unforgettable evening, the audience counted down to midnight on the holographic checkered flag dance floor, then celebrated with sparklers and a champagne toast when the clock hit midnight.

The Essential Guide to Perfecting Your Eyebrows

Study says Bella Hadid is the world’s most beautiful woman