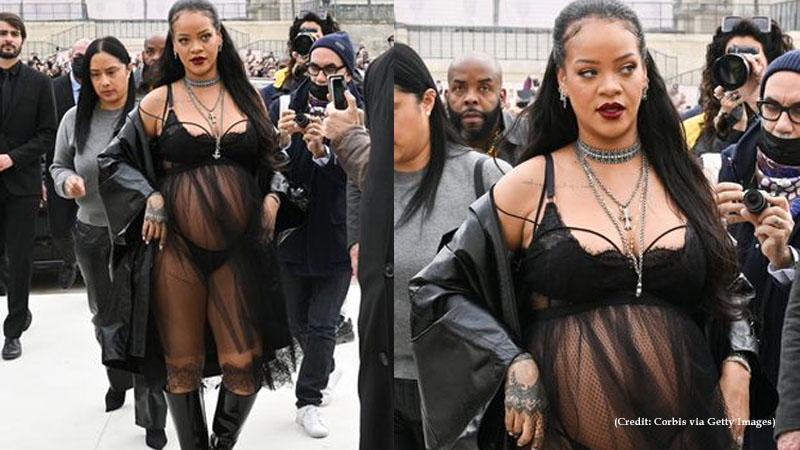 Rihanna’s baby bump will be getting quickly used to cold weather as the pregnant superstar braved chilly temperatures to attend a Fashion Week even wearing almost nothing but lingerie.

The stunning 34-year-old award-winning singer delighted fans at the end of January when she revealed she was expecting her first-ever child with boyfriend A$AP Rocky – aka 33-year-old Rakim Mayers.

The couple announced their happy news at the time with a photoshoot in a snow-covered New York as the music icons wandered through the Harlem neighborhood with Rihanna’s naked and pregnant tummy proudly protruding out beneath a thick coat.

Now Riri has arrived in Paris – where temperatures are as low as a bracing two degrees Celsius – where she was spotted doing the opposite of wrapping up while en route to the Dior Fashion Week show.

The This Is What You Came For singer stunned in a black bra and knickers and added a sheer black lace babydoll nightie.

She matched the revealing outfit with a pair of knee-high boots and a black coat which she wore off her shoulders and pulled away from her body.

The glowing pop singer added extra sparkle to her look with extravagant jewelry with earrings, necklaces, and rings catching the sunlight as she sashayed to the fashion show.

Rihanna has been proudly showing off her baby bump since announcing her pregnancy just over one month ago.

You Should Stop Using Scented Lotion If This Happens To You

NPR Attempts to Fluff Hunter Biden, and the Beclowning Commences