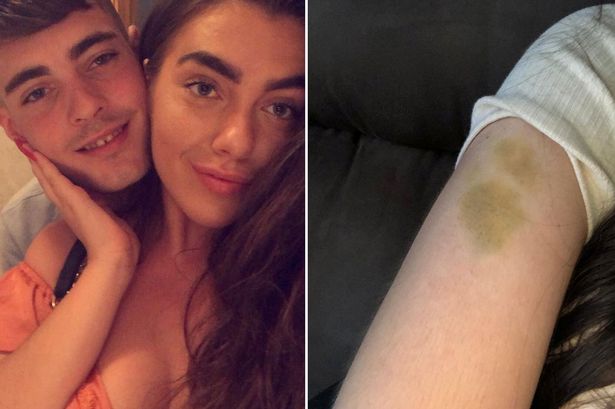 A woman feared her evil ex-boyfriend was going to execute her after he made her kneel in a field following a campaign of sick abuse.

Naomi Baxter, 22, said she was “head over heels in love” with Connor MacDonald, 23, who trapped her in a violent relationship for 18 months.

He physically assaulted Ms Baxter on multiple occasions, including spitting in her face, kicking her and punching her.

The vile thug also told her he would “love” to kill her and put her “six feet under with her dad”, who died when she was just 12.

MacDonald was jailed for 12 months after pleading guilty to assaults and making threats to kill at Preston Crown Court.

He threatened to stab Ms Baxter’s family members and demanded she meet him in a nearby field or he would “smash her gaff to pieces”.

When she arrived, he forced her to turn around and kneel on the ground. When she looked back at him he had his hand down the back of his joggers where she thought the knife was.

As Ms Baxter ran from the field, he laughed and told her: “You can go but if you do your whole family will die.”

Two people found her and the police were alerted.

The victim had been too terrified to confide in family and friends about MacDonald’s relentless abuse.

His manipulation went so far she would apologise for “making him” torment her.

She bravely explained her experience. Ms Baxter, from Kirkham, Lancs, said: “It’s so hard for me to look back – I’m still struggling every day to come to terms with what I experienced.

“Despite everything he put me though, I believed he was the best boyfriend in the world. But he was an evil man.

“He told me I’d never be believed – he convinced me it was all in my head, that I deserved it.”

Ms Baxter met her tormentor in school when they were 14 but only started dating him 18 months ago.

After MacDonald was jailed, she urged others in similar situations to speak up – especially during lockdown.

She said: “He may not have broken any of my bones, but he has certainly broken other parts of me. Becoming free from his chains was liberating, but trying to heal myself has been a long and lonely path.

“I have been left absolutely traumatised by his actions and am living in constant torment because of the abuse he had subjected me to for so long.”

She went on: “I am on the road to recovery and letting all of the taught behaviour fall off me. It is a lot harder than I can put into words, but it’s a lot easier than living through it.

“It was too late for me but maybe other people can still escape this.”

Madonna opens up about her scar on right thigh