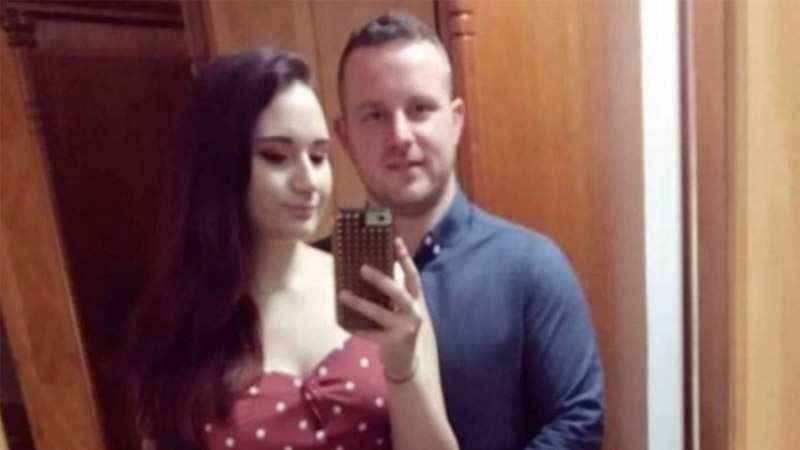 A brave woman has spoken out about her terrifying experience of being gaslighted by her own boyfriend.

Alina De Guiseppe, 24, became too afraid to leave the house after being subjected to a horrific campaign by her partner Anthony Clarke, 36.

For a year-and-a-half, Alina was perplexed and then paralysed by fear as she began receiving texts from unknown foes which became more and more sinister.

Clarke, from Chatham, Kent, sat alongside her vowing to find those responsible for the unrelenting abuse from phone calls, chilling texts and fake social media accounts.

One message said “I promise that if you keep ignoring me you will regret it” while the latest threatened to throw acid in her face.

Last week, Clarke was exposed as the person behind the gaslighting campaign at Maidstone Crown Court where he sobbed continuously in the dock.

After admitting harassment, he was handed a 20 month suspended sentence and told by the judge he had “escaped going straight to prison by the skin of your teeth”.

Speaking after the hearing, Alina, from Maidstone, Kent, said: “We planned to settle down and have a family. We did everything together.

“It was hard to realise someone you believed loved you and cared about you would do this.”

Alina was just 18 and working at the M2 service station when she met Clarke who worked at the nearby garage.

She said: “He was very charming, very confident and would flirt not just with me but other people. I was quite young, 18 at the time, and I liked the attention. I thought it was great.”

The pair made it official when Alina was 19 but their relationship was on and off.

She said: “We broke up a few times. If I would get attention from other people he would be suspicious.

“At the beginning I didn’t think too much of it, I just thought he was being caring.”

Clarke would want to see Alina’s phone even when she was texting her mum and eventually demanded to see screenshots of conversations on social media to keep tabs on who she was talking to.

Alina said: “I felt I couldn’t go out with my friends without him having a say in it.”

The couple also had good times together and Clarke would make her feel special and loved.

In 2019, Alina began receiving messages from an unknown number claiming to be from a girl who said Alina had wronged her and threatening to expose her to her family.

Alina said: “In the beginning I tried to figure out what they wanted and who they were.”

When she blocked the number, Alina was bombarded with calls from withheld numbers including at work. But whenever she picked up, the line was cut off.

She would be insulted over text and if she blocked the number, a new number would spring up.

Separate messages threatened to throw acid in her face and break her nose.

One message she recalled listed the names of her relatives and their addresses, while others made her think she was being watched.

She said: “I was physically scared to leave the flat. It struck fear into my day to-day life.

“I would stare out of the window sometimes looking for anyone suspicious or a car hanging around.

“Even now if I feel like someone’s walking behind me I will get paranoid I am being followed.

“He saw it was affecting me and I would get upset and he would say ‘I will try to figure out who it is. I will get it to stop’.”

Gradually Alina began to suspect Clarke and confronted him but every time he would deny it, she said.

She added: “The last time he got quite upset, he made me doubt why I asked him. He would do everything to throw me off the scent.”

Alina suffers from panic attacks which became more frequent while being harassed by Clarke who told her going to the police would only worsen her mental health.

She said: “He knew how fragile and vulnerable I was and he took advantage of that completely.”

Clarke’s vicious lies came to an end in the summer of 2020 when police traced the phone numbers to him.

Alina blocked his number and hasn’t spoken to him since but she is unsure whether she will be able to trust anyone again.

She said: “I haven’t moved on in the sense I feel I could be with someone, just being able to trust someone again. I don’t know if I can do it.”

During the sentencing hearing, Emin Kandola, defending, said Clarke “now understands that this incident would have been horrible for the complainant”.

Addressing Clarke, Judge Recorder Ed Burge QC said: “The mental anguish that you needlessly inflicted on her can only be guessed at. You have escaped going straight to prison by the skin of your teeth.”

The judge told Clarke it was an unusual harassment case, which normally involves ex-partners unable to deal with a break up.

He said: “But you were in a relationship with the defendant and you were gaslighting her by sending vile and abusive text and Facebook messages, threatening violence.”

Over the next two years Clarke will have to undergo mental health treatment and attend rehabilitation sessions.

He is also banned from contacting his ex-partner indirectly or directly.