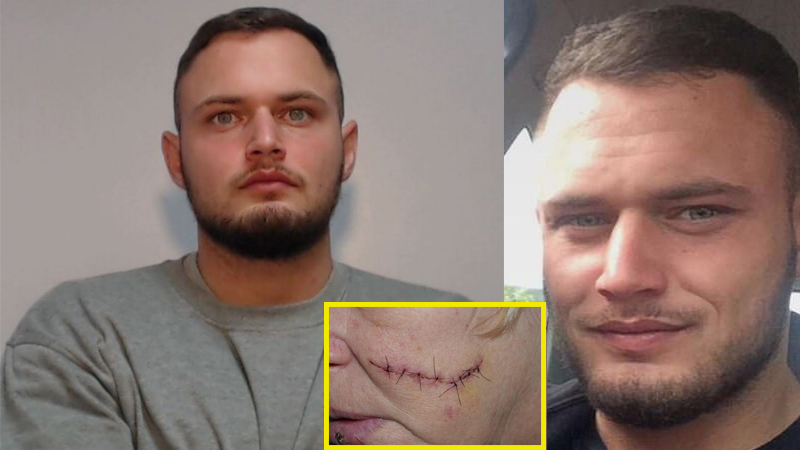 A violent thug who tried to kill two women in separate horrific knife attacks has been jailed for life.

Jayden Hayes, 24, attempted to kill one of his victims just 90 minutes after he had been released on bail by magistrates following other alleged offences.

The court had been provided with ‘misleading’ information, it was said.

At a previous hearing at Manchester Crown Court in October he pleaded guilty to two counts of attempted murder and on Friday he was jailed for life with a minimum tariff of 14 years.

He first struck on November 1, 2019, when he stabbed a 61-year-old Joy Clarke nine times as she returned home from a chip shop in Oldham.

She was knifed in the head, face and chest and was rushed to hospital with serious injuries but miraculously survived, Manchester Evening News reports.

His second victim was a 71-year-old woman who he attacked in an alleyway off in the Derker area on November 20 around 6pm.

He cut her throat and left her for dead.

On both occasions, Hayes was seen ‘scouting’ the area looking for victims.

Hayes, who suffered from drug induced psychosis, was said to have an ‘unhealthy interest in stabbings’.

He searched for information about knife attacks online and had a picture of the Coronation Street character Pat Phelan on his phone, who was knifed to death in a plot line in the soap.

“Both women were alone in a public place, and were attacked without warning from behind in the hours of darkness,” prosecutor Rob Hall said.

“It was only good fortune and their fortitude that kept them alive.”

Judge Alan Conrad QC said: “This is a chilling case, in which you Jayden Hayes brought terror to the Oldham area.”

Both of Hayes’ victims were in court as he was sentenced.

Ms Clarke said she suffers flashbacks and nightmares, and that scars and other injuries are a ‘constant reminder’ of her ordeal.

Reading her statement in court, she said: “I wonder why my attacker did this to me.”

Despite the impact of her injuries, Ms Clarke said she hopes that Hayes ‘receives the help he needs to change his way’.

The second victim described the day of the attack as the worst in her life, saying she suffers panic attacks and flashbacks.

Police were able to link Hayes to the attack using CCTV and phone evidence.

“Hayes was identified as a suspect within a few weeks at which time he was arrested and detained under the Mental Health Act due to circumstances at the time.

“There followed a painstaking investigation to establish sufficient evidence for the Crown Prosecution Service to consider.

This Man Claims He’s The Reincarnation Of Jesus, And He Actually Has Over 5,000 Followers