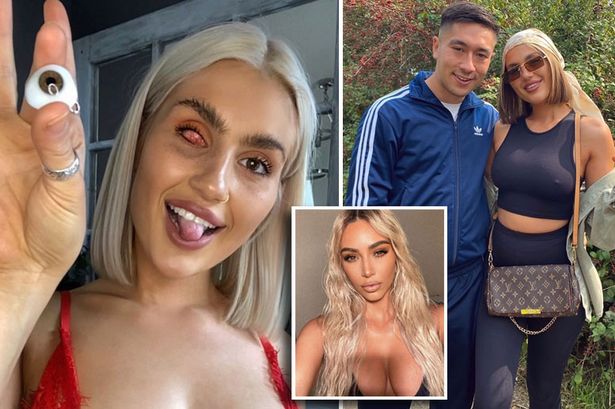 After losing her eye to cancer, a woman started sharing pictures of her empty socket online.

Olivia Deane, who many think looks like Kim Kardashian, defied trolls who called her a “one eyed pr*ck” by posting the pictures.

And speaking candidly about her journey on social media helped others going through similar health battles.

She hopes the images will help people with prosthetic eyes to embrace themselves.

This wasn’t the only positive to fighting against her haters.

The 23-year-old care assistant, from Horsham, West Sussex, has also found love since she started Instagramming.

Back in 2008, Olivia was diagnosed with retinoblastoma – which is rare cancer of the eye usually found in children under the age of four.

Doctors uncovered the growth during a routine sight test when she was 12-years-old.

After the devastating diagnosis, she was put through 16 rounds of chemotherapy at Great Ormond Street Hospital, her eye was removed in December 2010, aged 15.

Olivia said: “I went for a sight test when I was twelve and my optician said she could see a black mass at the back of my right eye.”

She worried losing her eye would prevent her from finding love – but this wasn’t the case.

The stunning influencer faced her fears by taking out her prosthetic eye and posting a picture on Instagram in March 2019.

She’d hoped to connect with others who’d had similar experiences and soon found an online community of people with prosthetic eyes.

Since her post garnered a lot of attention, she has encouraged others to bare their empty sockets and embrace themselves.

Olivia believes facing cruel trolls is worth it to support other people in her situation.

She said: “I’ve had some horrendous comments on social media but I’ve learnt to block them out.

“I ignore them, and they mean nothing compared to the amazing comments I get. I share for the people who need my support, and they support me too.”

Olivia added: “I just want to get my story out there and help other people. Retinoblastoma can be seen even in pictures taken with the flash on, you can see a white light in the eye and that is the cancer.

“It’s so common in young children, but people don’t know about it or know the signs to spot it.

“I feel lucky that I was diagnosed later in life because most people that go through retinoblastoma don’t remember it.

“I was only the second person in the UK to be diagnosed with retinoblastoma over the age of five.

“The younger children don’t remember what they went through like I do, so I feel like I can help by sharing my experience.”

Olivia gained confidence after posting about her journey and has since met her 24-year-old boyfriend Max in February 2020.

She is currently studying an NVQ in health and social care, and hopes one day to work at Great Ormond Street Hospital supporting young children with retinoblastoma.

The influencer added: “I want to help children going through retinoblastoma and showing them that everything will be OK, and that life will get better.”