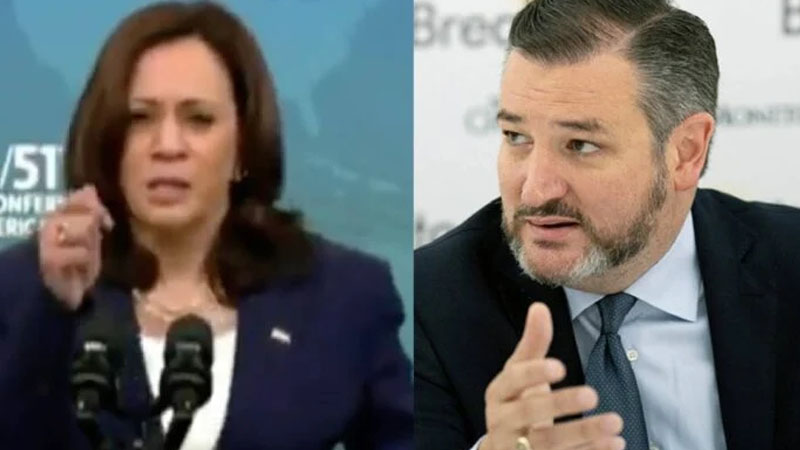 Well, the GREAT BORDER CZAR Kamala Harris has been supposedly assessing the border crisis and after all her “hard work” she’s finally come up with the “reason” for the sudden surge at the border.

Well, are you sitting down, because I’m sure that you’ll be completely and totally shocked….It’s (drum roll please) CLIMATE CHANGE.

Yes, suddenly, and out of nowhere, the weather has blown into town and turned everything on its heels.

It’s not the fact that Kamala and Joe and all the Dems raised their hands and promised illegal aliens “freebies” if they were elected into power. Nooooo. That has nothing to do with it.

This is absolute and utter hogwash. It’s amazing that we’re actually paying these goofs money to mess up this badly.

Well, Ted Cruz got wind of Kamala’s discovery and he responded to it with one perfect 4-letter word.

I don’t know about you, but I could have thought of a better 4-letter word, but I think Ted Cruz wants to keep his Twitter account intact.

Here are some of the other comments from folks online about Kamal’s big “findings.”

“This is false and a bogus attempt to deflect from the actual #BidenBorderCrisis the Biden Administration caused and make it a “climate” problem with a supercharged wealth redistribution solution. Punchline: American security, families and business will suffer.”

“How did the weather change so drastically within 12 months? It didn’t, obviously.”

“I thought it was the Democrat Welcome Wagon.”

“Nonsense. It was under control a year ago.”

“The root cause of the crisis is your open border policy, @kamalaharris”

It’s amazing how Climate Change can just morph and do amazing and bizarre things to suit the left’s agenda, just like COVID….

Things that make you go hmmm.

My ex-husband moved in. He pays $150 for cable, his only expense, and gives me the silent treatment if I ask him to pay for dinner