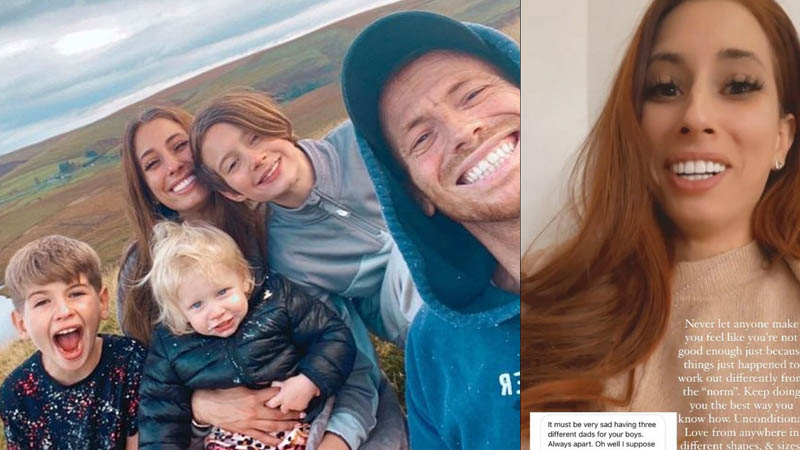 Stacey Solomon has savagely hit back at a troll who slammed her for having three children with three different dads.

The 31-year-old Loose Women regular told her fans how she was taken aback after one of her followers sent her the remark.

The follower sent Stacey the comment after the star said her two eldest children had asked to stay with their dads longer than they had planned to.

It came after Stacey took to her Instagram story to tell her followers how she is really missing her children because two of them are with their fathers.

Sharing a snap of her family with fiancé Joe Swash, they all could be seem beaming from ear-to-ear as they looked happier than ever.

They wrote to the star: “I’m really missing the big pickles today.

“They wanted to stay longer at their dads and because they are doing school from home they can.

“I do get sad when they don’t want to come home, but I know how happy it will make their dads and I never want to stop them from having the chance to make memories with their family.

“But oh my gosh I miss them. It’s lovely for a couple of days, less mess, less noise, but then the house just feels so empty and Rex looks for them everywhere.”

The troll commented back: “It must be very sad having three different dads for your boys. Always apart.

“Oh well, I suppose you are happy about it.”

A shocked Stacey hit back by uploading a selfie of her and placing the follower’s comment over it along with her own words.

Stacey hit back: “Woah there Wilma, it’s far too early for that kind of judgement and of course I am happy about it!”

She added in a caption: “Never let anyone make you feel like you’re not good enough just because things happened to work out differently from the ‘norm’.

“Keep doing you the best way you know how.

“Unconditional love from anywhere in different shapes and sizes is all they’ll ever need.”