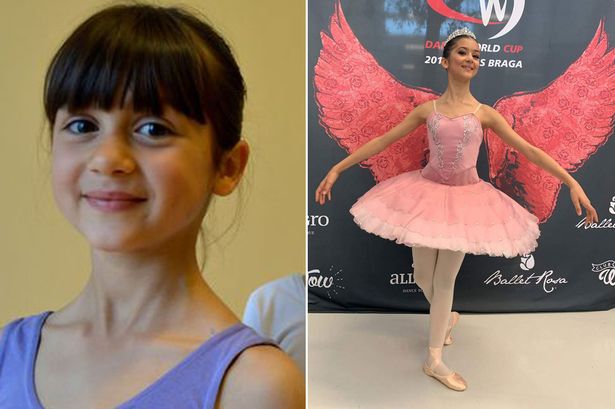 Poignant tributes have been paid to a teenage ballerina who saved the lives of four other young girls after her untimely death a year ago.

Valentina Sanna, 14, died on January 1 last year after contracting a rare form of meningitis while seeing family in Sardinia, Italy.

The popular teenager from Crosby, Merseyside, was a talented dancer who had earned herself a place at the Royal Ballet School.

Valentina’s dad, Dr Alberto Sanna, who now lives in London, told the Liverpool Echo that Valentina’s death saved the lives of four others through organ donation.

He said: “We managed to donate four organs. Unfortunately we didn’t find anybody compatible in the short-term for her heart, I would like to think it was too big.

“But very recently the grandfather of a young girl from Turin, in northern Italy, said she had received her lung and the girl had cystic fibrosis.

“She now has a normal life and he wrote to his paper in Sardinia to say thank you to Valentina.

“We still don’t know who they are, but it elicited different kind of emotions. It’s fantastic this young lady can go back to normal life without a machine next to her, but at the same time you think, it was our daughter.”

Dr Sanna said the family were touched to know Valentina had helped other young women have easier lives and said it was something his “kind” daughter would have wanted.

He said: “We have to help each other in one way or another. This is one way she will carry on, in helping other people.

“She was a very special girl, very generous and very kind.”

In the spirit of Valentina’s kindness, Dr Sanna said in the year since her death the family have raised funds to help other people through ballet.

Dr Sanna said it is hoped, after the pandemic, that money can be used to help disadvantaged young people go to ballet lessons or camps.

He said it’s hoped this can help people in Liverpool as well as in other parts of the world and the scheme will honour Valentina’s passion for dance.

Valentina was a talented dancer at Procter Dance Academy in Crosby and her skill led her to earn a place at the Royal Ballet School.

In helping others, Dr Sanna already has a Liverpool-based charity called Early Music as Education which has already helped thousands of people.

‘Kim Kardashian, Kanye West could fight over property with sticky notes during divorce’

Jen Psaki Just Did It Again, Smacks Down Reporter Who Seemed To Suggest Biden’s Not Concerned About Unity Because He Hasn’t Met With Kevin McCarthy