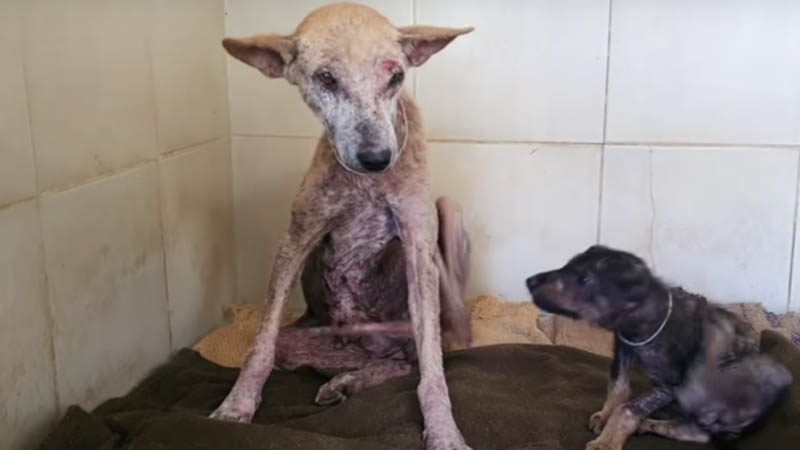 Life on the streets is cruel enough. Homeless animals suffer from starvation, lack of shelter and clean water, and danger from oncoming traffic as they cross busy streets to find food. It is exhausting and relentless. In many parts of the world, stray animals run rampant. It isn’t possible to house them all but many organizations, Like Animal Aid, do all they can to help as many animals as possible.

The rescue group received a call about a dog that had severe mange. Mange is always challenging to treat but her case was so extensive that she had lost all of her fur, leaving her exposed to secondary skin infections, parasites, and potential sunburn which could be fatal. Animal Aid dispatched volunteers to help the dog. She welcomed the volunteer’s treats because she was understandably starving, but she had no intention of being picked up and taken away.

The dog wasn’t just wary of people. She had good reason for staying on the streets. She was a new mother and her babies depended on her. It took a lot of coaxing, and a lot of dog treats, but the volunteer was finally able to get close enough to Momma to pick her up. Now it was time to find her puppies.

One of Momma’s pups looked okay but the other baby, they named Coco, was in bad shape. She was also suffering from mange. Her eyes didn’t look good either. She seemed weak and confused. The volunteer picked the puppy up and brought her over to her mother. They would bring both dogs into the rescue center together.

Momma was put on the exam table. Her poor body was riddled with mange. She needed topical antibiotic ointment and daily medicated baths. They hoped that with their diligence and good nutrition, she would make a full recovery. Momma was scared but the medical team did their best to soothe her.

Coco was examined next. The little puppy worried the medical team. She was lethargic and underweight. They gave Coco a lot of reassurance and love, then applied the topical treatment to her skin as well. She would also need daily medicated baths. Thankfully, mom and baby could remain at the rescue center together until they recovered.

Once the dogs were settled in, it was time for their first meal. Momma and Coco weren’t used to being confined to a kennel nor interacting with humans in this capacity. When a volunteer came in with a big bowl of food, the dogs were a bit worried at first. But once the volunteer knelt down and showed them that she only had the best intentions (and a delicious bowl of food!), the dogs came over and began to eat. It warmed everyone’s hearts right up.

Even though the dogs were safe, they were in a strange environment. Coco so tiny and so fragile, snuggled up to her mom every chance she got. She was only able to sleep tucked into her mother’s body. It was a beautiful thing to see. Their bond was so obvious and so pure.

After a couple of weeks of diligent treatment, Coco and her mom improved drastically. Coco even had the energy to play and it drove Momma a little crazy. The cutest thing happened next and the volunteers were in awe. Coco watched her mom carefully and imitated everything she did. If Momma scratched her ear, so did Coco. If Momma sat down to scratch, so did Coco. Coco didn’t take her eyes off of her mother and it was utterly adorable.

To see what happens with Momma and Coco next, check out the video below. We are forever grateful for Animal Aid and all they do for the community. We realize there are more strays than they can handle but they do the very best they can!