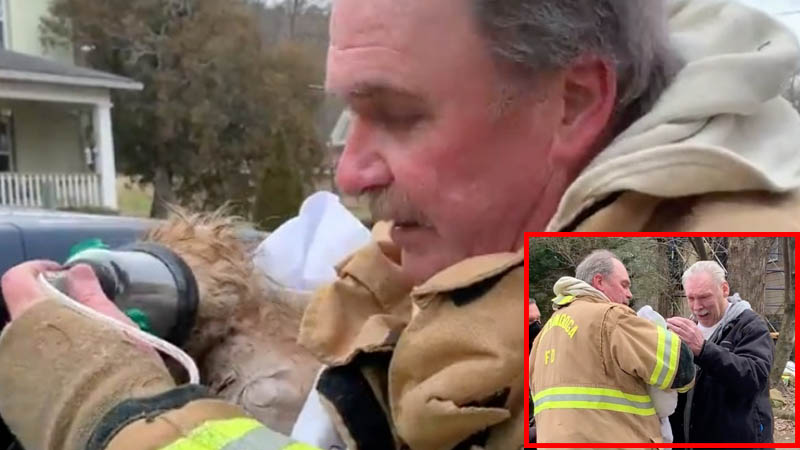 One of the worst things that can happen to a person is to have their house go up in flames. That’s what happened to a family from St. Elmo in Tennessee. The devastating house fire destroyed everything inside the structure, including the lives of several pets. Two glimmers of hope emerged from the inferno, including the fact that none of the human residents were injured.

The second ray of light came when firefighters were able to save one of the family’s beloved dogs. A local person filmed the moment Senior Firefighter Scott Rouse carried the dog from the rubble and wrapped him in a sheet. As he stood with the dog cradled in his arms, Rouse began administering oxygen to the furbaby. He comforted the dog and made sure she was being taken care of at the scene.

“I could see the sadness in this family’s eyes as they got the news that their pets did not survive,” @SunnyD_wx of News12Now wrote on Twitter. “But, then a @ChattFireDept firefighter walked over with one dog in his arms and I could see a little glimpse of hope.”

The touching moment was captured on camera when the victim of the fire was reunited with his dog. The tears filled his eyes, and he was immediately grateful to have one of his pets survive. Although firefighters were able to get the blaze under control in around 10 minutes, several dogs, cats, and birds were killed in the fire. About 60 percent of the house is considered totally lost as the investigation continues.

We extend our condolences to the family on their loss. To see the reunion, press play on the video below.