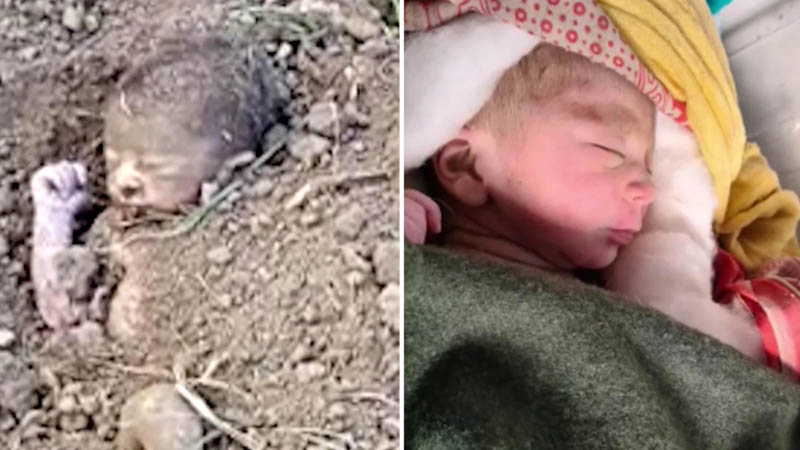 A newborn baby has been rescued after being found buried alive on a farm.

The child was discovered by a labourer who spotted a face poking out while working in the fields in Khatima, India on Wednesday.

Footage shows the man, other locals and the police working frantically to pull the baby out – saving its life.

The dust-covered child appears motionless as a woman wipes its face and wraps it in a brightly-coloured scarf.

Remarkably, after the infant was rushed to a hospital to receive treatment, it is now said to be in a stable condition.

It’s unknown how the baby came to be buried in the field, which is located near the country’s border with Nepal.

So far, it’s also not yet been confirmed if the child is a boy or a girl.

Last October another infant, also in India, was discovered alive in a clay pot buried several feet below the surface of the earth.

A man was burying his own child which had died in hospital when he heard crying at a cemetery in the northern state of Uttar Pradesh.

After digging up two to three feet of dirt, he found the four-day-old baby girl who had been buried in a clay pot.

Hitesh Sirohi told the Times of India he found the baby wrapped in a cloth and crying.

“At one point I thought that my daughter had come alive,” he said at the time.

“But the voice was actually coming from the pot.”

A cemetery security guard told police and the girl was taken to a nearby hospital.

Medical superintendent Alka Sgarna, who oversaw the tot’s treatment, told CNN: “The baby had some infections and weighed only 1.5kg (3.3 pounds).”

The girl had various breathing problems and needed a ventilator, with experts estimating she had spent several hours in the ground.

Preggers Hilary Duff Had The Biggest Misconception About S*x & We Can All Relate To It!