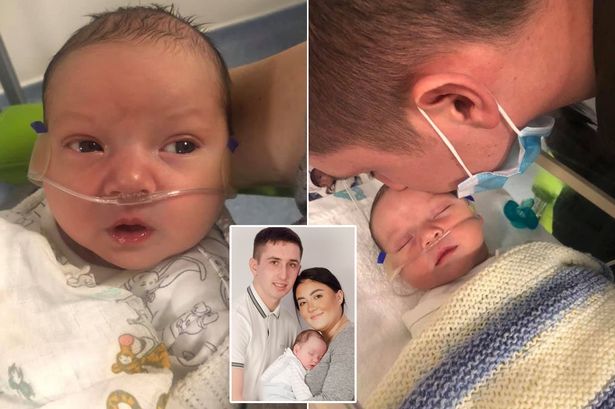 A baby who swallowed his own faeces twice during labour was left fighting for his life in hospital.

Newborn Jude O’Neill began a battle for life seconds after entering the world on November 10 at Ayrshire Maternity Unit in Scotland.

The tiny baby suffered from meconium aspiration, a syndrome where a newborn breathes in amniotic fluid containing meconium during the time of delivery.

The condition can be brought on by stress during labour, such as infection or low oxygen levels.

Mum Cerys Savage, 21, says she and partner Jamie were terrified they were going to lose their little baby boy.

She told the Daily Record : “It was so scary, the most frightening time of my life.”

Everything seemed fine straight after the birth as Cerys and Jamie enjoyed their precious first moments with their baby son.

Mum Cerys had contracted Strep B during her pregnancy at 21 weeks and had been treated with antibiotics while Jude was still in the womb.

Their nightmare began the following day as the mum was preparing to be discharged, a midwife noticed Jude was not breathing properly.

Cerys said: “I literally had my coat on to leave and the midwife has a wee look at him and said she wasn’t happy with his breathing. He was breathing so quickly. I didn’t know any different so I hadn’t noticed.”

The tiny baby was immediately transferred to the neonatal unit at Crosshouse Hospital where he was treated for an infection caused by meconium aspiration.

Distraught Cerys and Jamie were separated from Jude for three days as he fought to survive.

The condition can cause severe illness or death in newborn babies and occurs in between five to 10 percent of births.

Cerys said: “Every maternal instinct you have as a mum says that you need to be with your new baby so to be separated from him in those first few days was so hard.

“We were terrified. They told us he was a healthy boy and he was full term so he had that in his favour. All the other babies in the neonatal unit were so small and he wasn’t so we just had to hope, but the doctors told us it was very serious so we knew he had to fight.”

After four days, they were allowed to see their newborn and just five days later Jude was strong enough to go home for the first time.

Cerys says: “He is like a different baby now. They said his breathing might always be a bit quicker than normal because of what happened, but it won’t affect him living a normal life.

“He is just a content and happy wee boy and we are so grateful to all the staff that helped him through it. They really do go above and beyond. They’re amazing.”

She added: “I look at him every day and thank goodness he is still here.”

A spokeswoman for NHS Ayrshire and Arran said: “We are glad to hear Cerys and Jude have recovered fully, and wish them both well.

“Due to patient confidentiality, we are unable to provide any details on the care and treatment provided.”

Donald Trump ‘preparing for 2024 election’ with comeback speech to supporters