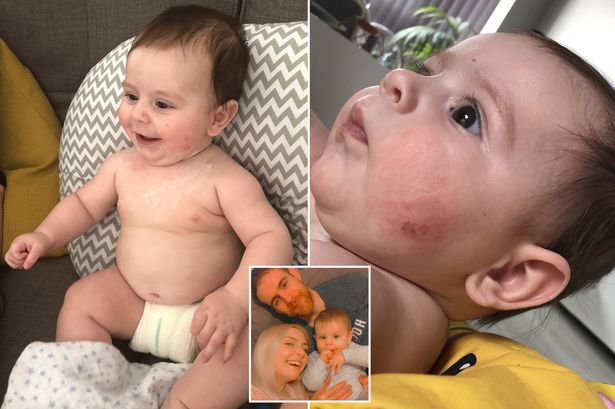 A news came from the Bristol, where Rebecca Hughes 32 years old had noticed that her 16-week-old son Leo’s skin was agitated on his cheeks and turned into red. She was applying healing creams but it did not heal. Amid of covid-19 she was unable to take her son to the see the doctor. So, she uses a medication that is classed as “hydrogen peroxide” to treat her son’s skin.

“He would be in his room in his cot but would wake every few hours having scratched his face either with his hands or by rubbing on the bedsheet,” the mum said.

“I felt useless, as he was clearly uncomfortable and could not understand why we were plastering him in creams all the time, with the majority being no use.

“I felt so frustrated and upset for him, and frustrated that we had no diagnosis.

“I suspected it was eczema but without guidance from the health visitor or GP, I looked for answers myself using the internet.

“I felt abandoned as a first-time mum and felt I had to do everything on my own with no help from health professionals.

“Ashley felt the same concerns as me, deeply frustrated and concerned for Leo’s wellbeing.

“We were offered hydrogen peroxide cream, which concerned me as it was such a strong medication for delicate skin but I followed the prescribed instructions religiously to try and minimise any adverse effects.”

By August 2020, Rebecca was desperate for help and so turned to social media for advice from other mums who recommended a new cream.

She said: “I had reached the end of my tether and, not knowing any mums in my area, I posted on Mum Tribe on Facebook and several other mums were immediately helpful and recommended a cream called Epaderm.”

The cream, which costs around £3, was developed by dermatologists to treat dry skin, eczema and psoriasis, and is suitable for all ages.

Although Leo’s eczema was never formally diagnosed, within two weeks of using the cream his condition had improved “significantly” and a month later the rash had disappeared completely.

Rebecca said: “I apply it after most nappy changes as part of the routine, predominantly on his face.

3 Ways To Juggle Kids And Romance