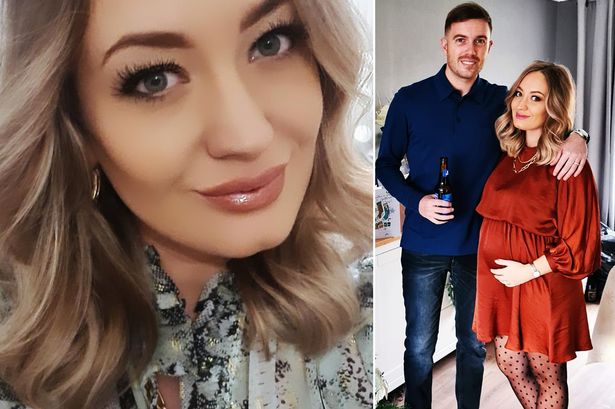 A mum-to-be was told the devastating news she has breast cancer at 31 weeks pregnant.

Claire Hilton-Ellison, from Huyton, Merseyside, first spotted a pea-sized lump on her right breast back in November and went to the GP to get it checked.

Despite assurances from those around her that the lump was most likely just a change in her breasts due to pregnancy, Claire said her gut instinct told her something wasn’t right.

The 30-year-old was initially referred to the breast clinic at Aintree Hospital to undergo an ultra sound followed by a fine needle biopsy, but the results came back inconclusive.

After returning for further tests, including a mammogram and a core needle biospy, doctors prepared Claire for the possibility that it could be cancer.

On December 11, Claire was diagnosed with grade 3 HER2-positive invasive breast cancer, while 31 weeks pregnant with her first child, reports the Liverpool Echo.

Due to the diagnosis Claire, who is now 34 weeks pregnant, has already received her first round of chemotherapy and will have to give birth to her baby boy prematurely at the end of this month.

But despite everything she’s going through, Claire is determined to stay positive and use her story to raise awareness of breast cancer in both young and pregnant women.

She is documenting her journey on Instagram @ grablifebytheboobz and raising money for cancer charities through a fundraising page.

Claire told the ECHO: “When I first found the lump, every man and his dog were saying it would be pregnancy-related and 80% of lumps come back benign.

“I was trying to remain positive but there was something in my gut that told me it’s going to be more serious than this.

“I went back for the results the first time and they said it was inconclusive and did a mammogram and a core needle biopsy.

“The doctor sat down with me and Macmillian nurse.

“At that point they didn’t have a complete diagnosis but they really prepared me for the fact they believed it could be cancer just to try and get my head around it – that actually really helped. I had a week to process it.”

Claire was diagnosed with breast cancer on December 11 but she is yet to find out what stage her cancer is.

She will receive confirmation of this after she has undergone treatment and surgery in the coming months.

Due to being pregnant, Claire is unable to have a CT scan or MRI scan as this could cause harm to the baby, but she has received ultra sounds at Aintree Hospital where she is receiving treatment.

She will have 15 rounds of chemotherapy in total and has already undergone one round, with another planned for next week.

Claire said: “I was angry at first. I thought this isn’t fair, this should be the happiest time of my life.

“I was angry in that first week and then I boxed that off.

“As soon the doctors told me what my treatment plan would be it was like a weight completely lighted off my shoulders. I trust in that plan that they know exactly what’s best for me.

“It just made me feel like I’m going to get this under control and stop it in its tracks.

“I don’t know in the long term how it will affect my fertility. I’m not going to let it take away from my pregnancy and the first years of my son’s life.”

Claire, who is expecting a baby boy with partner Keith, is due to be induced and will give birth naturally at Liverpool Women’s Hospital at the end of this month.

She is determined to raise awareness of breast cancer and encourage other women to check their breasts for any lumps or unusual signs.

Claire said: “If something this rubbish can happen how can I flip it on its head and make sure something good happens?

“Before I found a lump and was actually diagnosed, you just don’t think it’s going to happen to you.

“You hear the word cancer all the time, it’s on TV everyday and everyone you speak to will have been affected by it but you take it for granted that it’s not going to be you. Especially being thirty and being pregnant with my first child.”

“The first step to diagnosis is through self examination. Get to know your boobs and if something in your gut is telling you something’s not right don’t be deterred by anyone,” Claire added.

“I just want any other woman to know if they are pregnant and diagnosed with breast cancer that there’s no right or wrong way to deal with it.

With the help of her best friend Rachael and family #ClairesArmy has been set up to raise money to support cancer charities.

They will be holding a range of events including a boot camp at the end of January as well as yoga and a silent disco in the coming months.

Best friend Rachael said: “The way Claire responded to this was with utter strength. It doesn’t surprise me because that’s just the sort of person she is.

“I’m so proud of her. I just think we have to all be behind her.”