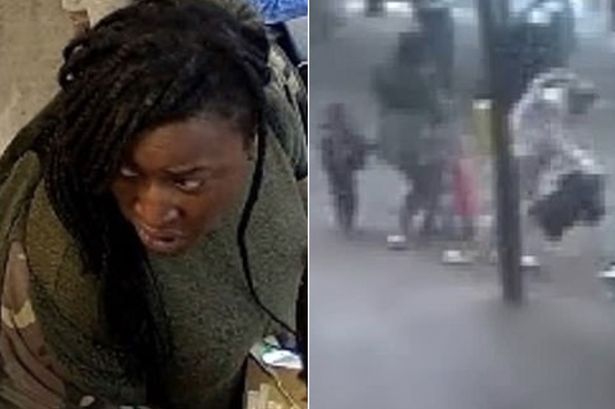 A mum, known as the ‘Pimlico Pusher’, shoved a pensioner towards a moving bus after a heated argument over a Tesco basket.about:blank

Ms Lancaster had attempted to avoid Doris by walking around the block after the row on May 29, 2018.

Doris told the pensioner, who is aged in her 60s, “You’ve met the wrong woman, you white b***h”, a court heard.

The two women met again after leaving the shop and Doris shoulder barged Ms Lancaster head-first towards the moving bus.

Video showed Doris, who was with her young son, brutally attacking the woman before fleeing the scene.

The victim fell forward into the passenger doors of the bus and suffered a cut to her head, as well as grazes and bruising to her ankles, knees and shins.

She also sustained an injury to her shoulders.

She was sentenced for 10 months, suspended for a year, with six months mental health treatment. Doris was also ordered to attend 26 days as part of a rehabilitation programme.

John Livingston, prosecuting, said the row erupted at the checkout because Doris believed Ms Lancaster’s basket had bumped against her son’s head.

“She started shouting at Ms Lancaster and at one point said ‘you’ve met the wrong woman, you white b***h.”

Doris shoved the pensioner and Ms Lancaster stumbled to the ground.

After leaving the shop, the mum continued to act “very aggressive” and shout into the shop, saying, “watch what happens when you come out.”

The pensioner even moved out of London out of fear of encountering Doris again, the court heard.

Defending, Darryl Cherrett, said: “My client has had for some time had significant mental disorder and learning disability and a certain difficulty in assessing situations involving her children.”

He said Doris had a history involving ‘significant domestic violence’ including one of her children and she interpreted the incident as Ms Lancaster knocking her child on her head.

Doris became known as the ‘Pimlico Pusher’ when police appealed for information following the incident.

Judge Sally Cahill, QC, said although the victim was fortunate to have escape worse injuries, she has had to make “substantial” changes to her life due to the attack.