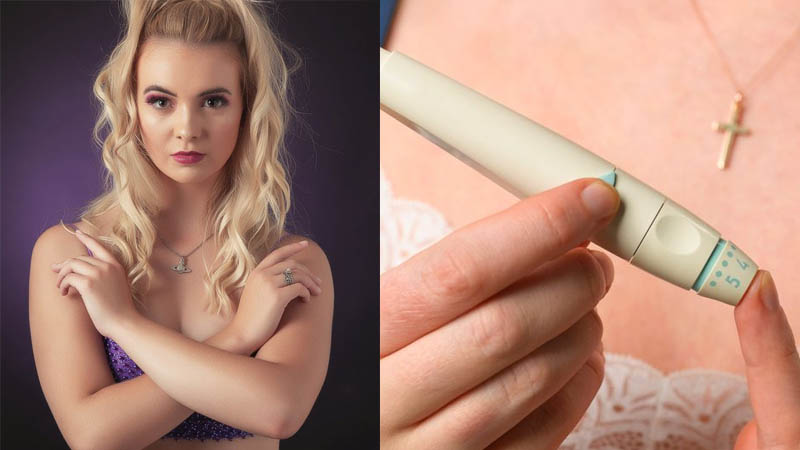 A Miss England participant has defied odds by reaching the pageant finals after nearly falling into a diabetic coma and cheating death.

The model was diagnosed with Type 1 diabetes and was rushed to hospital when her condition deteriorated.

Leah Green, 18, survived the traumatic ordeal, which occurred just three days before her GCSE exams in May last year.

She was taken to hospital in a life-threatening condition and doctors warned she was just hours away from a diabetic coma.

The budding model had spent a week of feeling thirsty, exhausted and had lost a stone in weight, but put it down to the stress of revising for her exams.

So the fitness fanatic was shocked when she was diagnosed with Type 1 diabetes following a series of tests at King’s Mill Hospital, reports Nottinghamshire Live.

Leah spent three days on a ward recovering from her illness and learning how to inject herself with insulin in order to manage the disease.

She then sat her first GCSE exam the day after being discharged from hospital against doctor’s orders.

Leah was given a medical note advising against sitting all of her exams due to the severity of her condition but the determined teenager managed to pass them all.

She has now opted out of her A-Levels to pursue a career in modelling while working part-time as a carer and has just reached the finals of the Miss England competition.

Leah decided to enter the prestigious beauty contest in the wildcard category and was left overjoyed when she reached the final shortlist.

She says she would use her title to raise awareness of the disease if she were to win the Miss England crown and hopes to become an ambassador for Diabetes UK.

Leah, of Warsop, said: “It has been a rollercoaster year or so and after what I’ve been through I thought I might as well go for it.

“This is the first time I’ve ever done anything like this but after dealing with diabetes and passing my exams, I feel more and more confident than ever to speak out.

“When I found out I had Type 1 diabetes it was frightening because you don’t think something like this would happen to you.

“It was a complete shock because I’d always had a healthy lifestyle.

“But crying about it and giving up doesn’t help you, so I carried on. If I did win Miss England I would like to raise awareness about it.

“I entered the contest spontaneously and never thought I’d be accepted. I was actually really shocked.

“Nothing like that has never happened to me. It is very different to what I normally do.

“I grew up on a farm in Warsop where it’s very rural. Beauty pageants are not part of life here.

“The current Miss England works for the NHS and as I’m a carer I think the competition is about showing what else you can do.”