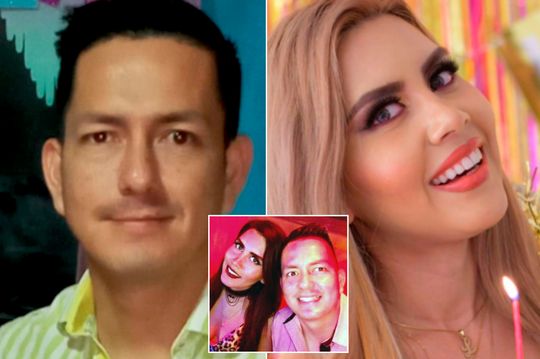 Police are hunting a man accused of murdering his wife and super-gluing her skull back together as the prime suspect goes on the run.

Police in Ecuador are treating the death of Lisbeth Baquerizo, 30, as suspicious after her husband claimed she died falling down the stairs.

An autopsy found that Lisbeth’s skull had been glued back together.

Her husband, named as Luis Hermida, has since fled the country as an arrest warrant is issued for him.

Lisbeth’s body was discovered by the stairs in her home in Ecuador on December 21st.

Her dad, Mario Baquerizo, was contacted by the father of Lisbeth’s husband who reportedly said: “You have to come quickly. Lisbeth is dead.”

Lisbeth’s parents Baquerizo and Kathy Munoz went to the scene where they found a coffin and a funeral home had already been contacted.

The victim’s father-in-law reportedly asked her parents to not contact the authorities so the funeral could be organised more quickly and insisted that they would take care of the service, organised for the following day.

The couple had been dating for 11 years and married for just 12 months.

At the wake, Lisbeth’s mother claims she noticed an injury above Hermida’s eye that he said he received during an attempted mugging.

One of Lisbeth’s friends approached the parents to claim that Lisbeth had been physically abused by Hermida and had not wanted to hell her family.

Mrs Munoz told local paper El Comercio she then left in the middle of the wake and reported the incident to the authorities.

The autopsy revealed that Lisbeth had died from contusions and puncture wounds at the top of her head and that the wounds were covered up using super-glue.

Authorities labelled the case a violent death and are treating Hermida as the prime suspect.

He has been on the run since an arrest warrant was issued on December 29th.

Prosecutor Luis Machado said the autopsy report also showed that Lisbeth suffered a “massacre of blows” before her death.