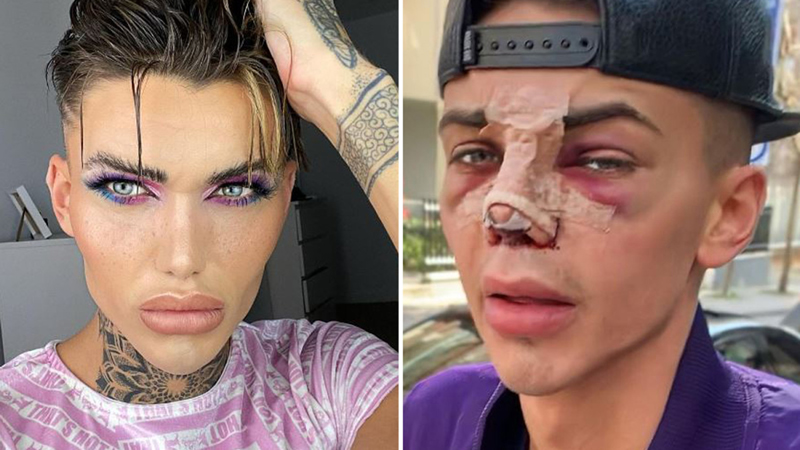 A lad who splashed £30,000 on plastic surgery has opened up about trolls blasting his looks.about:blank

Levi Jed Murphy has had fillers in his lips, cheeks, chin, jaw and even under his eyes.

Other procedures for the 24-year-old include a nose job, lip lift, a temple lift, a cat eye lift and teeth straightening.

In total, Levi, who runs an OnlyFans account with his boyfriend, is satisfied with the results of his surgeries.

But despite being content with his appearance, the lad, from Manchester, has had his fair share of negative backlash.

His first cosmetic procedure was getting his lip fillers at the age of 19.

He said: “I ended up loving how it looked and went back like a month later and have kept on going back since.

“When I was 20, I started getting cheek, jaw and under eye fillers, but I’ve lost count of how many.

“It wasn’t because I was insecure or hated the way I looked, but because I get bored of my face easily and like to change up my look.”

Levi, who gets his top-ups for free because of doing promos, says he could “happily live with the face” he has now.

He did his research and ended up choosing to go to Turkey as some of the procedures are more expensive in the UK.

The plastic surgery fan added: “I had started my OnlyFans account and was earning over 10 times what I was working in retail.

“The money was absolutely crazy and allowed me to have all of the work that I wanted to get done.”

He said: “Instagram put out a filter where it shows you what you would look like after having plastic surgery and I loved what I saw.

“I worked out all the different procedures that were shown in the filter and then went about having them done.

“I love grabbing people’s attention – even with my surgery, I broadcast my recovery over social media to bring attention to me.”

But Levi hasn’t always had the best response from people online.

In the past he’s been told he looks like Handsome Squidward and even the mask from The Purge.

He concluded: “But honestly, I am so used to getting horrible comments, I don’t take anything to heart. Either good or bad.

“My mum and boyfriend completely support me in whatever I do and that is what’s important to me.

“I also get loads of people saying that I’m an inspiration or that I’ve helped them with their confidence which is cute.”

Over half of COVID-19 survivors suffer from major depression

BREAKING: Donald Trump is Starting a Social Media Platform And It Will Be ‘Ready within Months,” Adviser Says