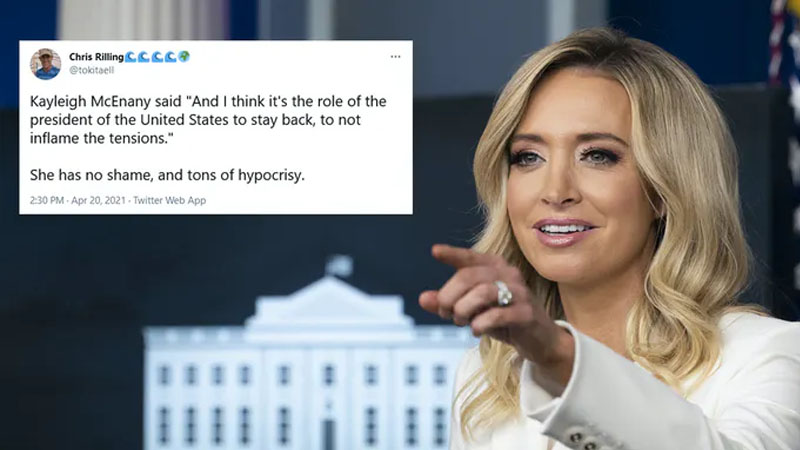 Kayleigh McEnany, the White House press secretary for former President Donald Trump, criticized President Joe Biden for weighing in ahead of the jury’s verdict in the Derek Chauvin trial by claiming that presidents should “inflame the tensions.”

McEnany made the remarks in a Fox News segment on Tuesday before Chauvin was found guilty in the death of George Floyd, a Black Minnesota man who died after Chauvin kneeled on his neck for more than 9 minutes. Floyd’s death sparked protests across the world against police brutality and racism.

Given Trump’s propensity for constantly inflaming tensions throughout his term as president, people online could not comprehend McEnany’s hypocrisy for criticizing Biden for saying before the verdict that he was hoping the jurors would reach the “right verdict.”

“We heard Judge Cahill caution elected officials and say ‘I urge you not to weigh in,’ just hours before or half a day before the president himself weighs in. Look, I’m glad he at least waited until the jury was sequestered, but I think that the country is such a tinder box right now, especially Minneapolis, there’s so much hurt, so much pain,” McEnany said.

She added: “I think it’s the role of the president of the United States to stay back, not inflame the tensions. I like that he called the family of George Floyd, President Trump did too, but it’s such a tinder box moment. I think he should have just reserved comment and say he’s praying for the family as we all are.”

The fact that McEnany said that presidents should not “inflame the tensions” was too much for people online, who pointed to numerous instances where Trump did that basically every single day.

“Does she not know who her boss was?” on Twitter user wrote.

“Does she have any recall of her former boss and his rhetoric? Apparently not,” another person tweeted.

“Idk how she said this with a straight face,” another user chimed in.

Numerous other people also weighed in on McEnany’s remarks.