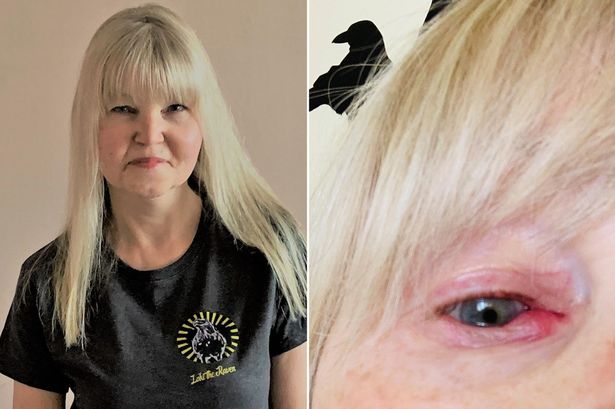 A woman has revealed how she feared she was going blind after a painful cyst on her eye made her life hell. Jeane Trend-Hill, 54, has spent all of 2020 using giant sunglasses to hide her face from the public due to the growth.

She was first diagnosed with the common eye condition blepharitis and told it would go away naturally in January 2019.

But the bump started to grow and attract “nasty comments” from strangers who thought it was a symptom of coronavirus.

The Londoner said: “About two years ago, I developed watery eyes despite having never had any previous problems with them before.

“But then at the end of last year, I noticed a small bump on my right eyelid that was around 1cm that was bright red and rubbery to touch.

“At first, I assumed it was a sty and it would just go away but it didn’t, so I visited my GP, who gave me eye drops – but they didn’t work.

“I looked like I was constantly crying, eating was difficult as every time I looked down to cut my food, my eye ran.

“It was also difficult to eat, read, watch TV and even walk.

“I became depressed, the lump was now the size of a large pea, people stared and strangers made nasty comments.

“Some people asked me if the lump on my eye was related to Covid, others said it was grotesque and that I was ugly or disfigured.”

The cyst continued to grow and she returned to her local eye hospital and was rediagnosed after 10 days of “awful” pain in June.

Jeane said it was like “sticking hot needles in my eye” and that she feared she was going blind and needed to clear the fluid every hour.

She thought her ordeal was over when the “corn-kernel-sized” cyst eventually popped out of her eye in mid-June 2020 and healed.

But just weeks later, she noticed a second chalazion cyst rapidly growing on her lower eyelid which blocked her tear duct.

Due to her other conditions, doctors were forced to insert a needle into her eye, without anaesthetic, in a painful op which failed to remove it.

Jeane then contacted a private eye doctor who decided to perform a number of laser treatments which finally removed the cyst last month.

She said: “The procedure lasted 55 minutes and the cyst was inside the tear duct and much larger than they originally thought.

“It contained sulphur and a lot of blood clots, which were removed.

“I had a 10-14-day recovery period and looked like I have gone several rounds with Mike Tyson, bruised with bloody tears.

“I was in pain but nothing too unbearable and I could see clearly when I removed the dressings, which was wonderful.”

What Is Milia? Dermatologists Explain Everything to Know About Those Tiny White Bumps

Kate and Wills’ different rules for George and Louis revealed

Trump ‘Will Be Back In Office’: MyPillow CEO Reveals Plan For White House Return