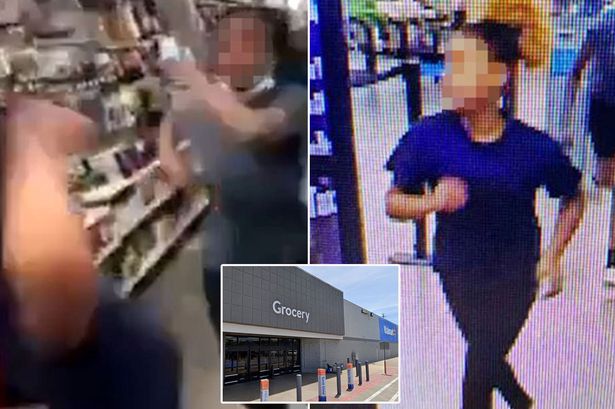 A group of young girls arrested over the fatal stabbing of a 15-year-old girl appeared to brag about the horrific incident after fleeing the scene.

In footage which has emerged, one of the girls can be heard saying: “I don’t give f***. If she killed her, she killed her. Oh f***ing well. She dead now.”

The murder victim frantically screamed “I’m bleeding” after she was knifed – allegedly by a girl aged just 13 – during a fight inside a Walmart in Louisiana.

After the girls fled the store, new footage emerged of the girls appearing to brag, as one said “she dead now”.

The footage emerged as police were trying to track down the girls, the Daily Mail reports.

Four girls – one aged 12, two aged 13 and one aged 14 – were arrested after the victim died in hospital.

All four remain in custody.

In the original footage, a young girl boasted “we just stabbed that b***h in her heart” after the 15-year-old victim was knifed to death during a live video stream.

During the disturbing video, which the Mirror Online did not show in full, a young girl armed with what appears to be a knife and the victim begin to exchange blows.

The victim’s chilling screams echo through the store as the fight stops moments later and drops of blood are seen on the floor.

The live stream continued as a group of girls ran out of the store and climbed into a car, where one looked into the camera and screamed: “We just stabbed that b***h in her heart. We don’t give a f**k.”

She had shouted moments earlier in the car park: “Just stabbed somebody at Walmart.”

As they drive off, the girl then mocks the victim for screaming “I’m bleeding”.

FDA alert: if you have this coffee don’t drink it, you could die