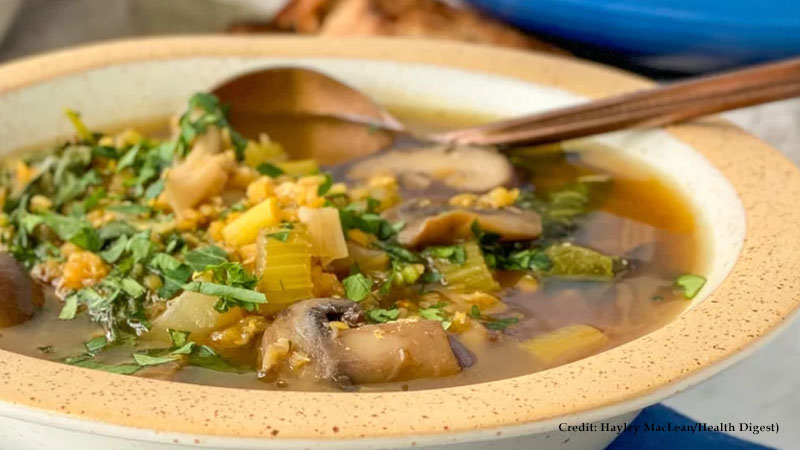 We all know we need more plants in our diets, and if you’re a vegetable lover, that’s easy enough to do. If you’re not such a fan of eating the rainbow (other than the Skittles version), you may find it easier to eat your vegetables in the form of something like this savory lentil and mushroom soup.

As recipe developer Hayley MacLean describes it, “This soup is full of healthy, delicious ingredients.” The most important ingredient, she says, is the lentils, which she shares are a good source of fiber, protein, B vitamins, and iron. The mushrooms, she tells us, also have vitamin B and fiber, and they contribute vitamin D (the “sunshine vitamin”), something we may not be getting enough of during the darker winter months.

Besides being healthy, this soup is pretty tasty, too. MacLean calls it “savory and rustic” with a “rich, wonderful broth,” and says it makes for a great lunch or a light dinner, although it could also serve as a first course for a heavier meal as well.

Gather the ingredients for lentil and mushroom soup

In addition to the red lentils and mushrooms, this soup also contains celery, kale, and leeks. MacLean says that spinach can be used in place of kale if you prefer, because both, “would give the same wonderful texture and flavor to this soup,” she says. And while you can replace the leeks with additional kale, MacLean says the leeks impart a stronger onion flavor.

You’ll also need some fresh garlic and thyme, as well as dried bay leaves and paprika. For cooking, you’ll use olive oil, vegetable broth, balsamic vinegar, and white wine. MacLean prefers pinot gris or pinot grigio for the wine, saying “They are both floral and sweet … [and] light in flavor.” You could use chicken broth in place of the vegetable broth if you don’t mind a non-vegan soup.

Heat the olive oil over medium-high heat. MacLean uses a dutch oven, but any heavy saucepan or stockpot would work. Stir fry the leeks with the celery and mushrooms for 5-7 minutes, until they’ve softened up. Add the garlic and cook until it’s fragrant — no more than a minute, though, since you don’t want it to burn. (Burnt garlic tastes bitter.)

De-glaze the pan with the white wine — though there’s no need to remove the cooked vegetables. Cook the wine until most of it has evaporated.

Pour the vegetable stock into the pan and add the herbs and spices. Stir it up, then bring the soup to a simmer. Once it’s simmering, add the lentils. Keep simmering the soup until the lentils are tender, something that should take about 15 minutes. Remove the thyme and bay leaves from the pot, then stir in the balsamic vinegar. This ingredient, MacLean says, “gives just a bit of brightness and acidity to round out this dish.

Add the kale at the end

The last ingredient to go into the pot is the kale (or the spinach, if you’ve made this ingredient swap). Stir until the kale wilts, which shouldn’t take much time. Add salt and pepper to your soup, to taste, then it’s ready to serve. You can, of course, garnish it with parsley if you like.

MacLean tells us that her preference is for serving this soup “with a few slices of crusty sourdough and a light vinaigrette-based salad.” It would also be good alongside a chicken salad sandwich.

Heat the olive oil over medium-high heat.
Sauté the leeks, celery, and mushrooms for 5-7 minutes, stirring occasionally, until they have softened.
Add the garlic to the pan and sauté for another minute, until it is fragrant.
Add the white wine to the pan to deglaze it, heating it until it has almost completely evaporated.
Pour the vegetable stock into the pan and add the herbs and spices, stirring to combine.
Bring the soup to a simmer and add the lentils.
Simmer the lentils for about 15 minutes, until they are tender.
Remove the thyme and bay leaves.
Stir the balsamic vinegar into the soup.
Add the kale and cook until it starts to wilt.
Season the soup with salt and pepper and garnish with fresh parsley, if desired.

Mark Ruffalo on working with Jennifer Garner after 18 years

Those breakfast foods are fortified for a reason

The Beef Jerky Recipe (Almost) Any Guy Can Make at Home