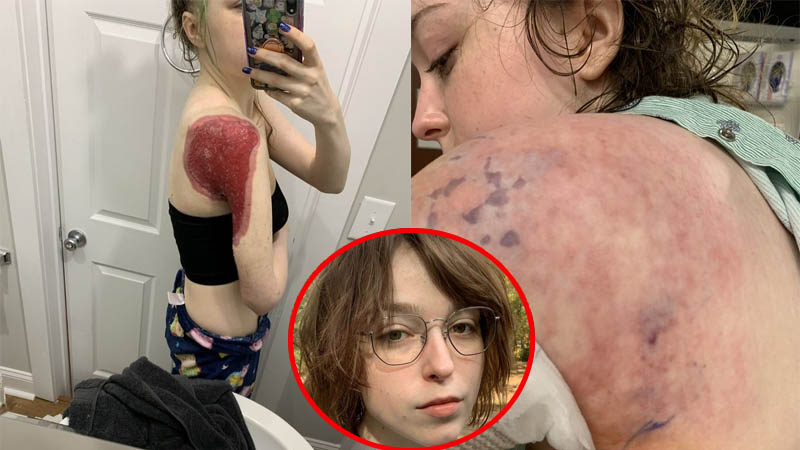 A young woman who technically died during surgery says she says she remembers the moment – and speaking to Death itself.

Carolina Bowen is a type 1 diabetic. She contracted a Rhizopus oryzae infection through her insulin pump.

She believes she caught the flesh-eating bug because she forgot to wipe the pump with an alcohol swab.

“Doctors really didn’t think I was going to pull through because they hadn’t seen this before,” said Carolina, a student at the College of Charleston, South Carolina, USA.

She spent a month in a medically induced coma in hospital in September 2019, and underwent five surgeries – and even died during one of them.

“I remember a door in front of me and a full moon illuminating it with water on the ground,” she says.

“Death was speaking to me and it was empathetic and telling me there was no shame in giving up.

The infection got so severe that doctors seriously considered amputating Carolina’s arm at her shoulder.

Luckily, they were able to save the arm with debridement surgeries, in which chunks of the infected flesh are removed.

The nerves in Carolina’s armpit and shoulder down to her elbow were cut out, causing her to lose most function in her arm and her muscles to atrophy.

“I was pretty dominant on my left side so I’ve had to relearn how to do a lot of things and I don’t use that arm often,” she said.

Carolina refused skin grafts, and instead, let her wound close without them.

“I opted to have no skin grafts because I did die during one of my surgeries, so I really didn’t want any more surgical intervention,” she said.

“I’ve had this wound for about a year and three months and it’s almost closed up all the way.”

Now after over a year, Carolina said that her kidneys have mainly healed and her respiratory system is good again, the only issue being her left arm.

She added: “Doctors told me I’m the only living survivor of this fungal infection in the U.S. that did not have to have an amputation.

Carolina says the experience has shown her how to appreciate life and all it brings.

“I was kind of on a destructive path before this, I didn’t care that much about my health,” she said.

“Dying really does remind you of your own mortality, that was a major takeaway for me and learning to appreciate the small things.”